My Muse usually visits me at 4 am. As I lie there, listening to my husband snore gently beside me, I compose prose in my head. It begins by nudging me awake, but in my mind it sounds good, and the better I believe it to be, the wider awake I become, until it’s banging off the inside of my skull and popping open my eyelids as though they are roller blinds. The only way to purge myself and get some sleep is to get up and perform a brain dump. This post is the result of one such episode. Thus a blog is born…

I’ve always been a blogger, I just didn’t realize it. When I traveled around the world, several years ago, I religiously wrote a journal a couple of times a week. I emailed it to everyone in my address book, intending to keep in touch with my friends and make those who weren’t my friends jealous!

As time wore on, I found myself sitting on planes and buses composing my next rendition in my head, unable to rest until I scribbled it down in a notebook. I was confused by this new found passion. As a biologist, I sneered at the concept of “Arty Farty” stuff – it was all too fluffy for logical me. (Spock and Doc McCoy are my favorite Star Trek characters – enough said. Actually – Star Trek? ‘Nuff said!)

When I settled back home in , after traipsing the globe for two years, life at home was, actually, nothing to write home about! So, I began to write fiction. To my surprise and delight, my husband fully supported this. When we moved to he suggested that I not bother trying to find a job, but that I should concentrate on writing instead. That I did, managing to complete the first draft of a novel and several short stories, one of which got published in November 2009. Happy days!

When we moved into our house, here in , we inherited a huge garden with seven raised beds and a selection of fruit trees. A daunting prospect for a relatively new gardener, like me. The front garden is somewhat over grown, with a lawn area and a selection of privet type shrubs. I plan to tear all that out and put in Californian native plants. A fairly ambitious project but worth it. I’m a tree hugging type of gal, and I learned a lot about the local Californian flora whilst volunteering as a “Weed Warrior” at Edgewood Natural Preserve – that’s a fancy way of saying, I pulled weeds in a beautiful place!

So, I’ve decided to write a blog about my journey in gardening, traveling, life, love and the pursuit of happiness!

Whilst thinking about a name for this blog, I thought about why we came to , and what lead me to travel so extensively in general. People have accused me of thinking that the grass is always greener on the other side. As a metaphor, it doesn’t quite work for us Irish – let’s face it, nowhere is the grass greener than in and most certainly not in , but then, we didn’t come here for the grass!

These are pictures taken from our back yard in July 2009 (courtesy of Laura) and February 2010. 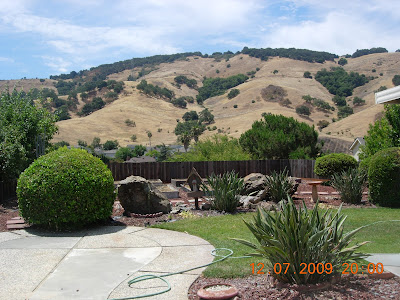 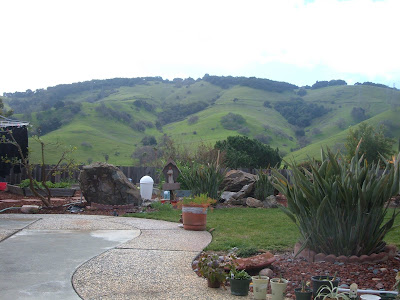 Now that the first purge has happened, I’m thinking, “What the hell am I doing at my computer?” It’s now nearly 5am. I’ve run out of steam. The muse is satisfied, as she always is by my obedience, and is not now forthcoming in any further aid. I’m all on my own now. Even though I was up early this morning, I’m still not tired.

On Saturday mornings, I go to a gardening class. I find that Californians are extremely punctual. Though the class starts at 10am, a time considered late here, everyone must be arriving in at 9.30am. At least, it seemed that way for the first week because when I arrived at 10 on the dot, the class were already settled in their seats, eyes forward, mouths shut, listening to the teacher, who had already started. She flashed me a look as though I’d walked in something best left to compost. I mouthed “sorry” and scuttled to the nearest free seat. No leisurely chat with my new neighbor, no rattle and hum of chairs and paperwork, oh no, we were straight into the business of soil structure for the first hour!

As it turned out, the class is really enjoyable, informative and there is a comfortable exchange of ideas. Judy, the girl I sat beside that first scurried morning, is as excited as I am about seeing our seeds germinate. She keeps me amused with tales of her wormery. The little blighters are constantly trying to escape and she is justifiably offended by it.

This morning, we had a recap of last week’s discussion on pest control, in particular, slug and snail control. Now that it is the rainy season, they are stampeding through my lettuce patch. Okay, well, perhaps stampeding isn’t quite the correct word but the muse is yawning at me now! Anyway, I swear by beer, in general, but especially as a form a of slug control. The trick is to fill an empty, clean yogurt carton with beer and then dig a hole near the lettuce the depth of the carton, so it is flush with the soil. It is essential to use a yogurt carton. Anything bigger means there is no beer left over for you! The slugs love the stuff too! They drink it, get drunk, fall in and drown. The first week I caught about thirty, last week not quite so many but still plenty, and the lettuce are looking great, and I’m running out of beer. I wonder will they mind if I switch to a cheaper brand? I’ll keep you posted on that! 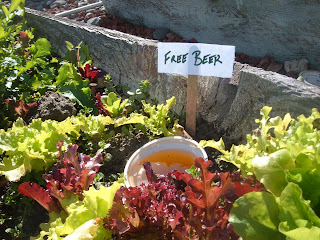 The instructor did go on to explore other methods of slug control. I considered insisting on the beer but figured that that was too much of a stereotype. Irish girl swears by beer!

So, now that the muse is spent, I must go back to bed. First, I’ll have to pop out to the back yard. The slugs are partying full swing on their fresh beer, and I swear I can hear them singing!

8 replies to A Blog to a Muse