! The last time I was there, in April 2004, I hated the place. But it is a good starting point for a road trip to the Grand Canyon, and there are lots of really cheap flights to Vegas from . With great reluctance, I organized our grand Canyon trip through this city that I described in my emails home in 2004 as “…an abomination of greed and decadence…” with “…its sheer unashamed attitude of providing humans with every opportunity to wholeheartedly indulge in all that is not quite pure!”

Harsh words! Yet my excursions to , in recent years, may have softened my attitude towards Vegas. Sure, it lays a variety of vices on a platter, but it really is down to the individual as to how to deal with that. There is a fun element in the gambling now for me. Last time I passed this way, I was dirt-poor, as I was returning from a two year world tour and didn’t have the latitude to lose money in casinos. Now, I can afford to lose twenty bucks (last of the big time spenders!), and my aim is to stretch that twenty out to last me all evening. I still suffer pangs of pity for the scantily clad waitresses, busting a gut to earn a living, or shudder to see beautiful young women gyrating in their underwear on stages throughout the casino. I saw some people sitting, dead eyed, for hours throwing money into a machine and wondered what pleasure they could derive from that. Each to their own! I don’t want to lecture about the place but to give advice about staying here!

Gambling aside, and that’s a big aside as you can hardly escape from it here. There are slot machines in the airport, in the convenience stores and just about everywhere you can turn. is a . It’s all about creating the dream and filling the imagination.

You can tour the world and rove through history on The Strip. There’s the Venetican for that touch of , complete with canals and gondolas. 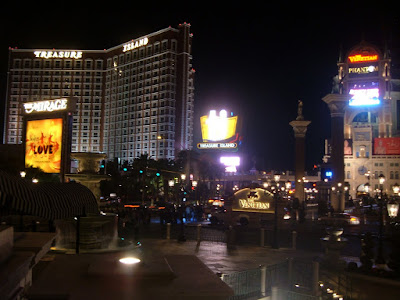 Travel back in time to visit the ancient Egyptians at the , and the Romans at Caesar’s Palace. 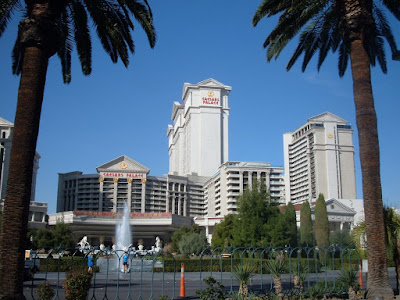 Lots of famous cities, like and , are represented by scaled down versions of their famous landmarks 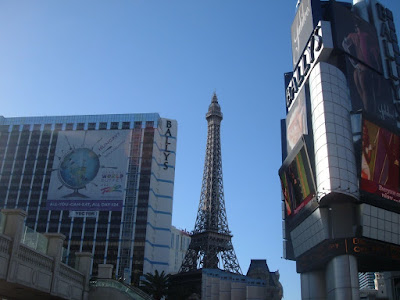 They even had a contribution from the Irish. 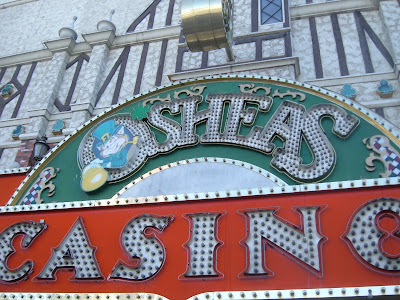 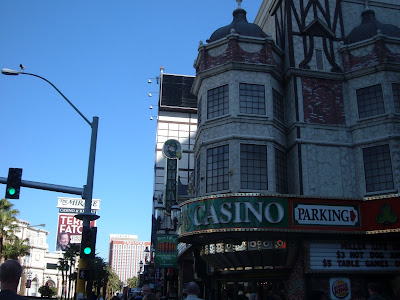 How glamorous? They even knew how cold my Mums home town was that day! 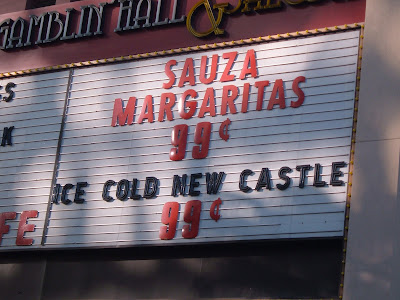 The only place to stay in Vegas is “The Strip”. Don’t even consider anywhere else! Last time I was here, I stayed just off The Strip, in a cheap dive. Our friends had their van broken into and had a lot of stuff stolen. The money we spent on taxis getting to and fro The Strip safely would have contributed nicely to staying in a better place, situated on The Strip. All in all, it proved to be more trouble and cost than the $25 a night room was worth!

There is a huge range of budgets to choose from on The Strip. The first night we were there, we stayed in the for $39.20 in total between us. 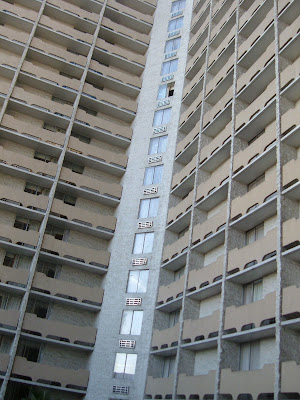 This concrete box, with windows and balconies, is situated slap bang, mid strip and is an excellent location from which to see many of the wonders of The Strip. From here you can easily dander to places such as , The Mirage – with its erupting volcano, The Bellagio and The Venetian – we had a nice dinner there too. 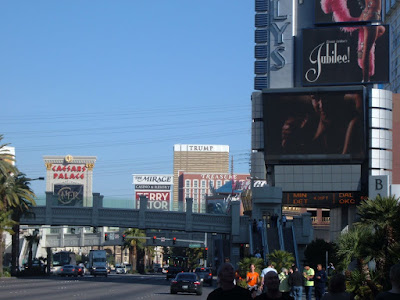 We had Breakfast in Paris, the next morning before we left. 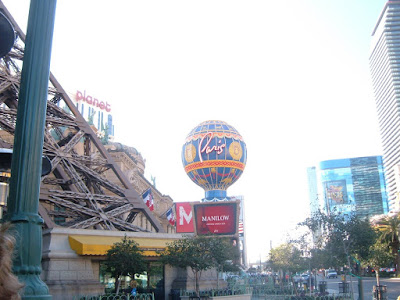 The room in The Imperial Palace was fine, with an oriental theme, but it could have done with a paint job and new carpets. It did have comfortable beds and was surprisingly quiet, except for in the morning, when a tour bus idled in a courtyard, beneath our window. 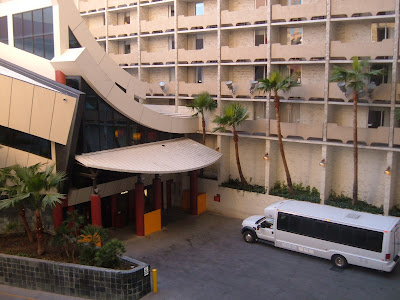 On our way back through Vegas, homeward bound, (I’ll deal with Vegas in this blog and discuss the Grand Canyon separately in the next blog) we stayed further south on The Strip, in the Egyptian themed . This casino hotel charges a resort fee of $12.95 on top of the room rate which was $78.40. For that you get a small bottle of water and access to the gym! I could do without the gym and buy my water somewhere else, but this resort fee is simply a money-making scam that many resorts now enforce. It’s annoying, but unless you refuse to stay there, I can’t see how to beat it. Incidentally, The had no such fee, though you also had to do without the minuscule bottle of water too. Such hardship!

The room was adequate, and certainly a novelty, built into the side of the pyramid that gives The its distinctive shape. It is an easy landmark to pick out on The Strip and at night has a huge beam of light shining from the peak of the thirty story high pyramid.

Though the room cost over twice as much as The , it was smelly (stale urine and cigarette smoke, Mum reckoned!), and it had no bathtub, though the shower was large, but it leaked all over the bathroom floor. This was by no means luxury accommodation. From this location we could explore the southern section of The Strip – The , The Excalibur and even take a walk up to .

The restaurants were excellent and we had both dinner and breakfast in the casino complex.

You are bound to find accommodation to suit your budget and style on The Strip. Check out the likes of Expedia for rates. Then, book directly with the hotel to avoid having to prepay. Very often you can cancel such bookings 24hrs ahead of time too, which you can’t do on Expedia. Check their cancellation policies to be sure.

I learned two very valuable lessons on this trip. The first is to do with car rental in . Don’t rent at the airport, contrary to the set up in most airports where car rental is on site, it is a huge hassle to rent from this airport. The rental area that serves the airport is a 15 minute bus ride away, whereas every hotel on The Strip has a direct shuttle to and from the airport. If is your only destination, you don’t even need a car. The strip has a monorail that runs between the major casinos, and if the weather is pleasant then walking is a good option, as the train ticket is $5 a go – expensive, and the walk gets you away from the ringing and bleeping of the slot machines! If you start to miss the clamor and noise many casinos have walk ways between them. I’ve heard that you can walk The Strip with out ever going outside.

Recession has taken its toll on the car rental industry! 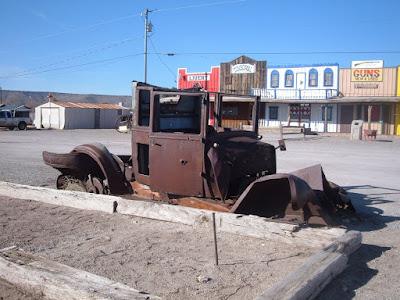 The second lesson probably applies not just in . If you do rent a car (or even rock up in your own car) and the hotel has free valet service, use it! I was reluctant to use the valet service at The . In the back of my head I thought “What if there was some kind of emergency and I need my car quickly?” By emergency, I suppose, I’m thinking earthquake, bomb scare, fire, flood or other act of God. Also, we had no change and the tipping policy confused me. I couldn’t remember when to tip. (I looked it up after our stay at The – you tip when you get your car back, so if your pockets are empty when you arrive, that’s no big deal.)

So, we self parked. We were tired, the car park was huge, and we got lost on the way into the reception. The next morning, we had to search three floors of the car park, dragging our suitcases behind us, getting grouchy and irritable, before we eventually found the car. It’s hard to find a car you’ve only seen it once or twice from the outside.

With great relief we found the car and headed to the .

On our return to Vegas, homeward bound, there was no question of “to valet or not to valet” – we happily handed the car over. Lets face it, what good would the car be in an earthquake anyway, especially if we couldn’t find it?

On leaving , we had to find the car rental facility amid huge traffic chaos. President Obama was visiting – I’ll bet he heard we were in town and was hoping to bump into us. Honestly, if he’d just give us some notice, we’d be happy to have a coffee with him and try to fit him into our schedule!

Thanks to Jane – the nickname for our GPS system (I’ll explain more about that in the next blog) we found a short cut and managed to make it to the rental place, only to remember that we had not topped it off with gas (petrol – for my European readers), so I dumped poor Mum and the bags there. Heart thumping with stress and the fear of getting lost, I went and got the gas and was back in fifteen minutes flat!

It is always a relief to get to the departure gate. And a bummer when the flight is delayed, as ours was, for an hour! However, it was worth it as we watched the Presidents motorcade drive across the tarmac and minutes later Air Force One took off in front of us! Cool!

Next week – The Grand Canyon!