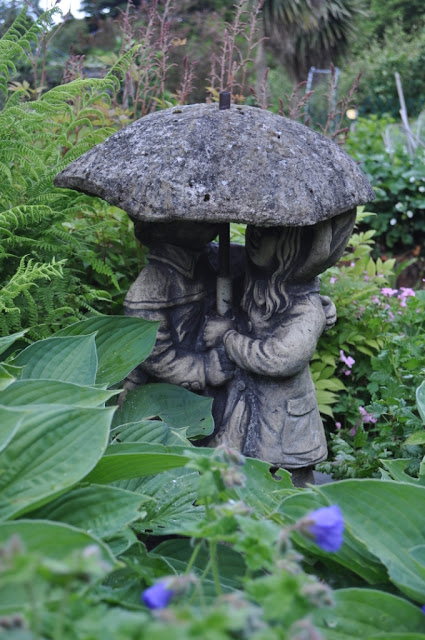 It’s been so wet this week in Ireland that even the stone statues in my Mum’s garden are taking shelter! My Husband and I flew home last Friday, the day after the Master Gardener graduation. It’s only rained twice in the week that we’ve been here so far – once for three days and then for four days. We’ve had all kinds of rain too – mizzle, drizzle, bucketing, pelting and even sideways rain – actually, mostly sideways rain. Gale force winds have kept it interesting in the garden. 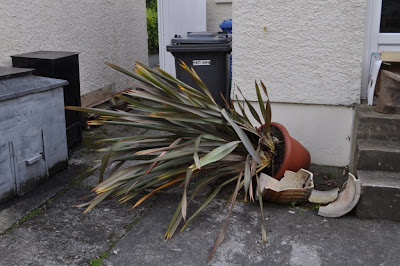 Today was payback time. I helped my Mum in her garden – only fair after all the help she has given me in mine. The big difference is that here it was wet and windy, but surprisingly invigorating and after shoveling the contents of her compost bin into her new raised beds, I was even down to short sleeves – until I set the shovel down and quickly cooled down.
I was enamored with her PVC raised beds. I don’t think they’d last too long in the Californian sun, but I liked how light they were and how easy it was to position them. 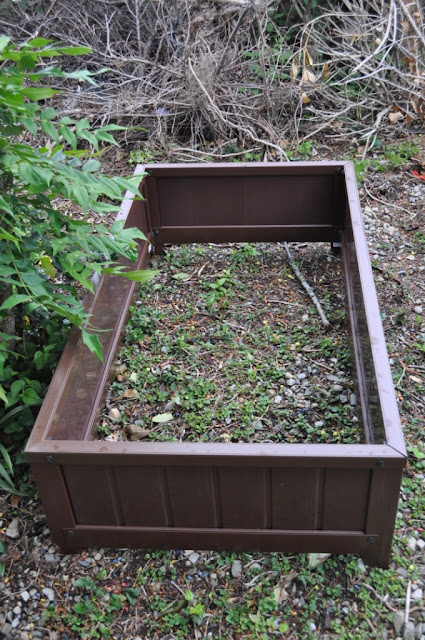 After filling two of them with compost, we finished them off with a finer grade potting soil, a birthday present from her neighbors – what would you do without neighbors? It looked just like chocolate cake and reminded me of the lovely cake Mareese made last week. 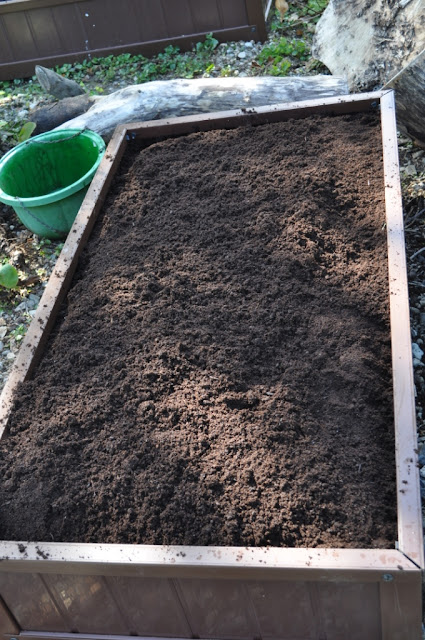 And here’s some she made earlier: 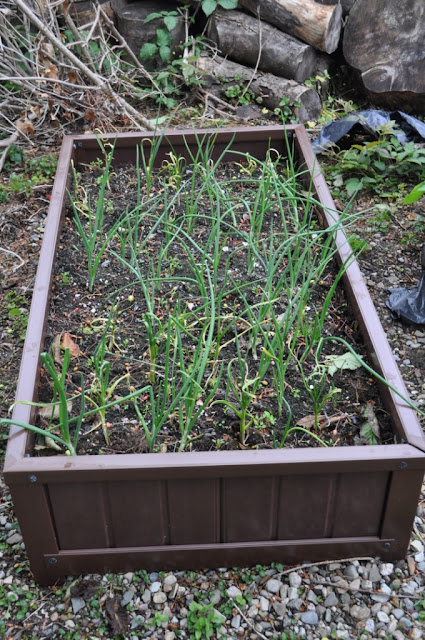 Planted with onions and garlic. and another one with a bountiful crop of Bok choi. 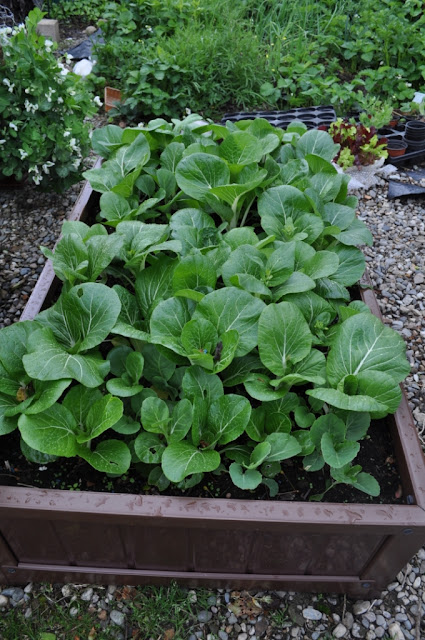 And like mother, like daughter – Mum too, grows potatoes in anything she can find. Here she has a crop growing in used fish boxes that she found when she was beach combing. How’s that for reduce, reuse, recycle? 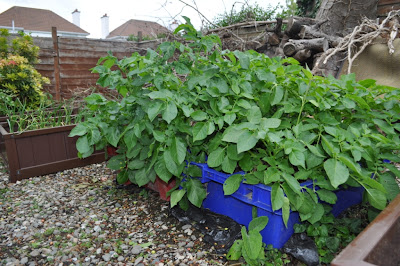 The massive cherry tree that towers over her garden promises a load of cherries in July. Some of the fruit has already started to pinken. No problem with chill hours here. 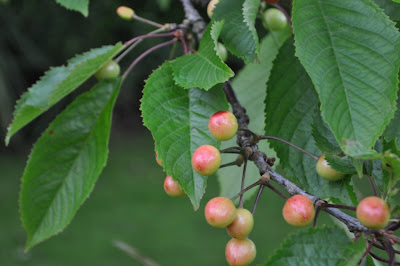 And I’d love to be here for the strawberries ripening also. 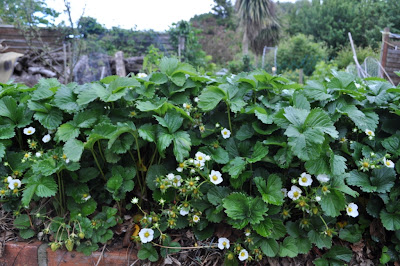 There is a song that describes Ireland as being forty shades of green. In the next photo there also seems to be forty shapes of leaf! 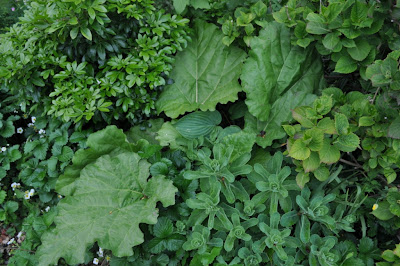 Mums garden is full to the brim of lush vegetation and not a single irrigation pipe needed. It is the main advantage of gardening in Ireland. 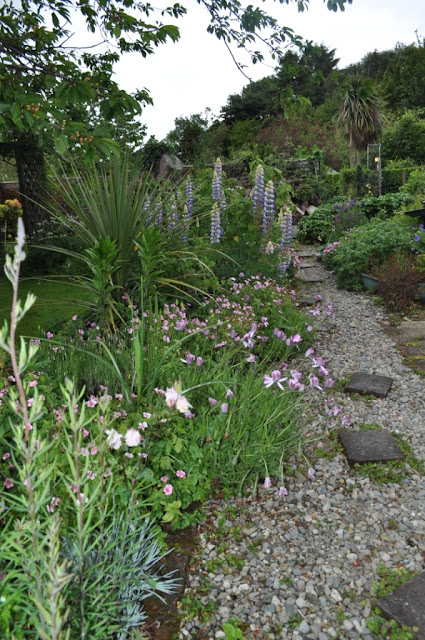 When I was four years old, apparently I told my mum that Ireland was like TVs. When it rained it was like watching a black and white TV (of course, way back then there was plenty of those around!) 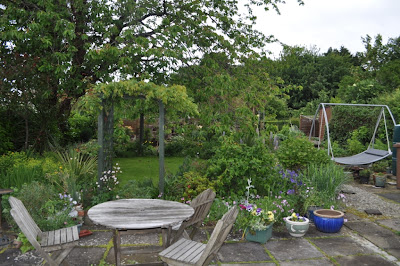 But when the sun came out it was like watching a color TV. 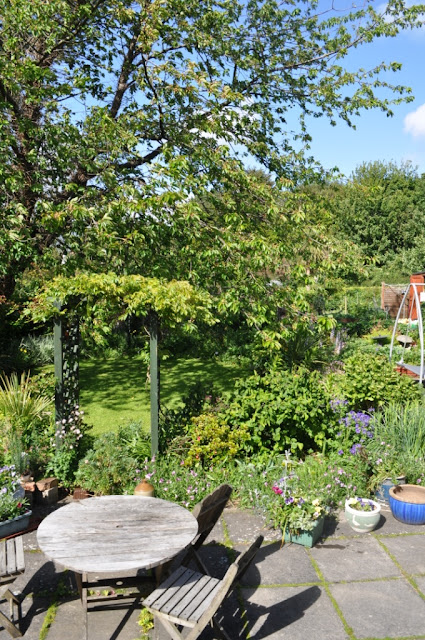 I caught this picture during a brief sunny spell (about 10 seconds long). As we worked away out side in the wind and the rain the most sensible member of the family was to be found curled up on the sofa. 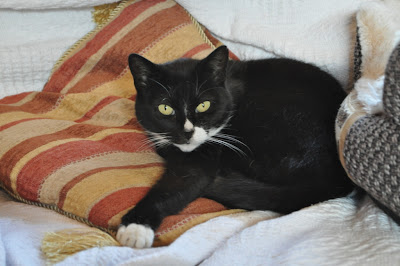 4 replies to Gardening in the old country.