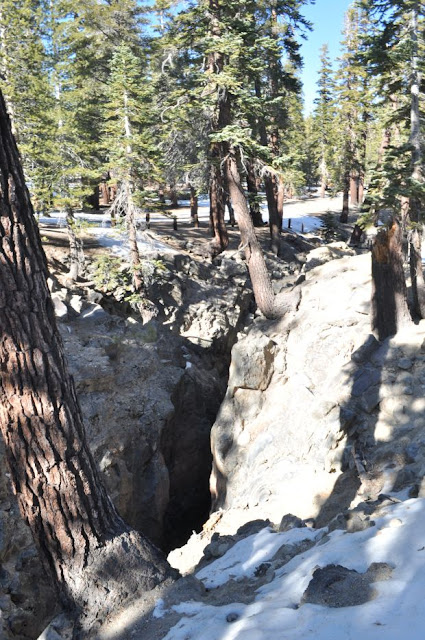 Okay, so according to the poster-board it’s not really a fault, it’s a fissure. Regardless, it’s still pretty impressive. 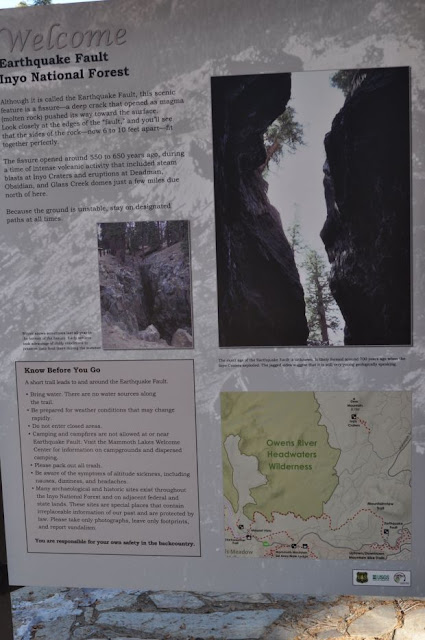 If you take the Minaret Road out of Mammoth towards the ski area and pass the Mammoth Scenic Loop Road on your right, the very next right is the road up to the parking lot for the Earthquake Fault. 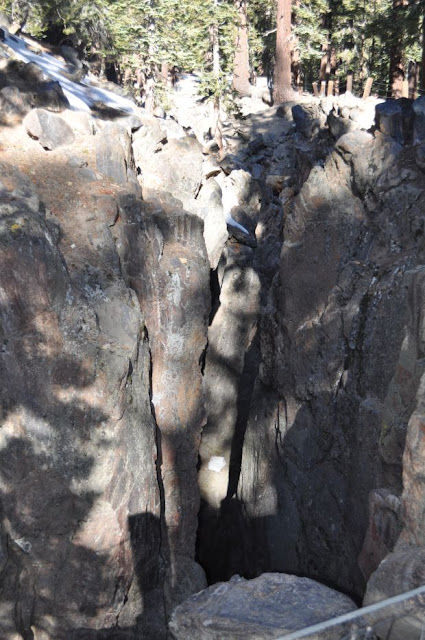 You can walk around here and explore the fault/fissure. It’s right there, not even a walk. In fact, you can even see the fault from the road as you drive over it a little further along where the Minaret Road crosses it. But it is worth getting out and having a gander at it. 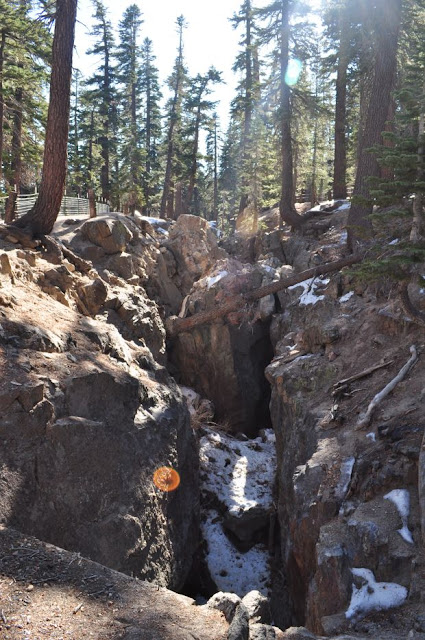 I particularly liked how this tree grew out of the side of the fault at right angles! 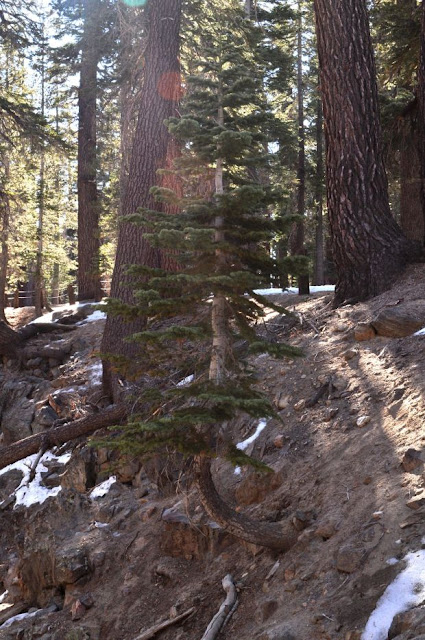 But that is just your warm up to the day’s hiking. Hop back in the car and head back towards Mammoth and turn left onto the Mammoth Loop Road. Keep an eye out for signs to the Inyo Craters. The road will be on your left-hand side. If you reach the US395 you’ve gone to far and will need to double back and clean your specs!

We had to park at the start of the road that leads to the parking lot as the road was covered in a two-inch thick layer of ice.  During the summer tourists will be able to drive all but the last mile up to the craters. It only added about 2-3 miles round trip to our hike and was very pleasant.

Inyo craters are three fairly recent (within the last 600 years) volcano craters formed from a  chain of eruptions. Here’s the low down! 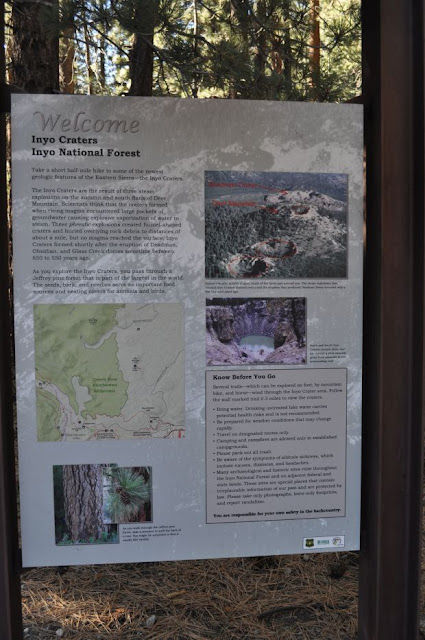 Like the fault, we had the place to ourselves. I’d imagine that in the summer these sights are thronged – unless of course everyone is at the Devil’s Postpile or swanning around Yosemite! (See my previous posts on this…)

If I didn’t know I was looking for volcano craters I’s have thought the first one was an abandoned quarry, frozen water and all. 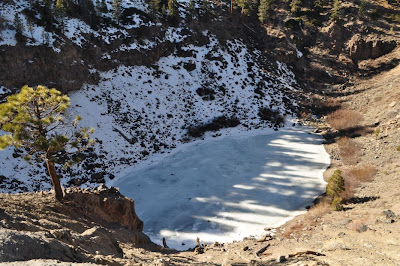 The edge looked precarious with soft crumbling rock and you can see where the  first fence wasn’t quite far enough back. I hope they didn’t discover this the hard way! One less tourist…. 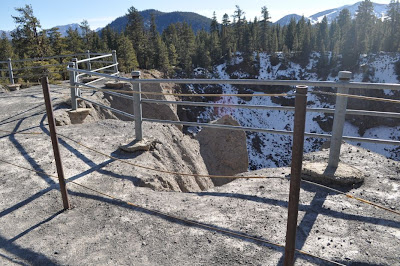 The second crater was slightly bigger. If this was the Goldilocks story it would be the “just right” one! However, this ain’t no fairy tale. This one seemed to lack a body of water, though it was hard to see down into the bottom with the trees in the way. 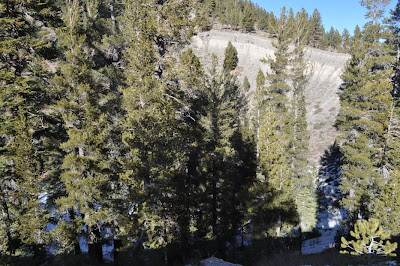 That’s Mammoth Mountain in the background in the picture below. 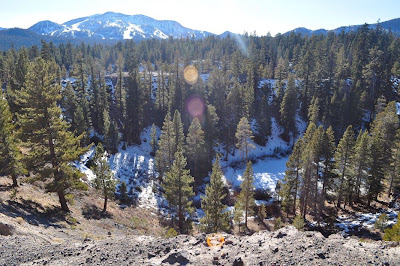 So we decided to summit Deer Mountain which was, unbeknownst to us crater number three. Where we thought the third crater was is anyone’s guess but a crater and a mountain are, to my mind, totally different things – one goes up in a point and the other goes down in a point!

Deer Mounatin went up quite steeply – check out the gradient using the trees as the vertical upright. 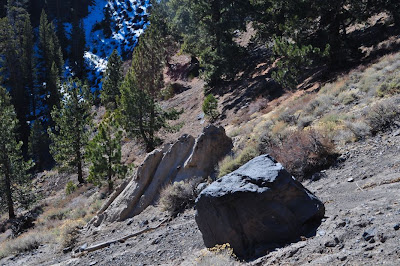 We could see the summit off in the blue yonder and headed straight up, pretty much forgetting about any trail there may have been. The one we’d been on had sort of petered out. 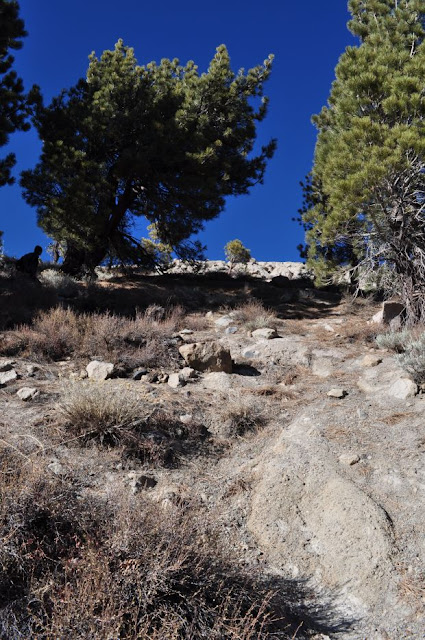 The top was all badlands, soft, crumbly soil, and steep. It was like trying to walk up a pile of brown sugar that had been in the cupboard a little too long. 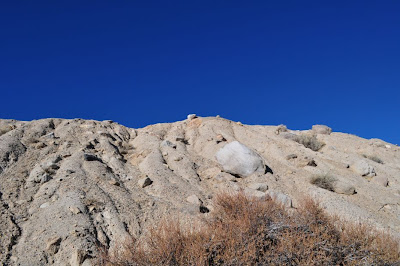 I was looking forward to sitting down on the top but when we got there, it was a craters edge with a vicious drop on the other side. I was scared up there and we didn’t hang around for fear that the land might cave beneath us. 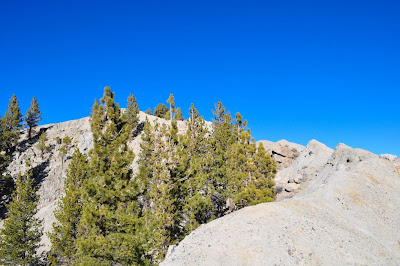 We seem to have a thing with craters in this part of the world. Several years ago we took off exploring around Ubehebe Crater in Death Valley with no water. I was dressed in a pink mini skirt, tank top and no sun screen. Not exactly hiking gear. And definitely not for hiking in Death Valley. (Surely the name might be some sort of deterrent!) 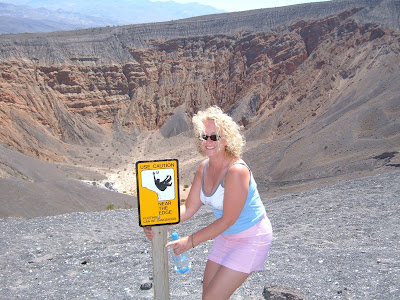 Did I mention the temperature was 100F+ ? 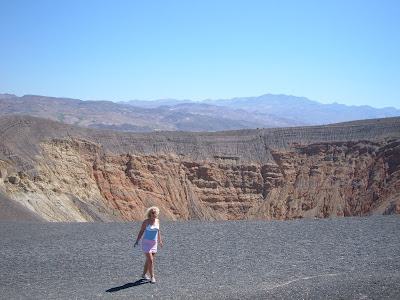 We’d walked around about what we thought was a third of that crater and decided we could circumnavigate it. 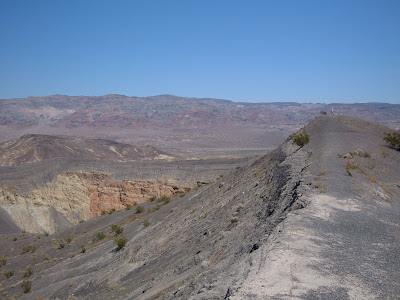 Can you see me in the distance, top right? After an two hours we were still walking. We could see our car across the crater , a mere spec in the distance and we were getting pretty thirsty. As it turned out we got back to the car without any drama, but all it would have taken was one one thing to go wrong – a sprained ankle, a startled rattle snake and it would have been a whole different story…
Thankfully someone was watching over us – both times!
Byddi Lee
Arnold on Dwellable
Filed Under : Earthquake fault, Inyo Craters, Ubehebe Crater