It’s one of those rare days in San Jose – grey clouds hang so low in the sky that you feel like you can touch them if you just stretch that little bit further, the rain is not waiting to fall, and I have even have puddles in the back yard. Yep, it’s most definitely rainy season. According to the weatherman, we are experiencing the effects of the pineapple express – a blast of storms all the way from Hawaii – weather that has followed us, in fact, because this time three days ago we were snorkeling in the warm blue waters off the Big Island, Hawaii. Coming home to this weather feels decidedly surreal, more like the days when my bump-down-to-earth after vacations dumped me into rainy Belfast and a trough of depression. Did I dream Hawaii? Did it really happen? It feels like a hazy, beautiful memory from another world. Still, I wonder if anyone who has holidayed in Hawaii can avoid the post-vacation blues, no matter where they live? 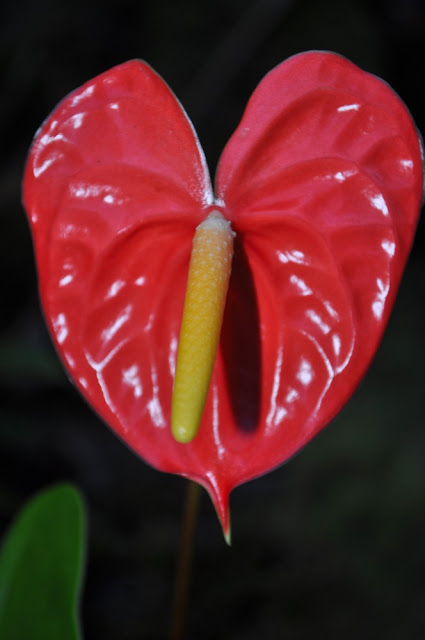 One thousand, two hundred and something photos later, (and that’s not counting the two disposable underwater cameras I sent off for development yesterday) I realize that the Hawaii trip cannot, and should not be blogged about in one post. So I’ll be breaking it down into at least six posts – the volcano, the East Coast one day road trip including the amazing Tropical Botanic gardens, the coffee growing, Manu Kea – the largest mountain on the planet (yes from undersea-base to tip 10000 meters compared to Everest’s 8000m above sea level) and the snorkeling. Today I’ll be starting with transport and our lodgings in the rainforest. 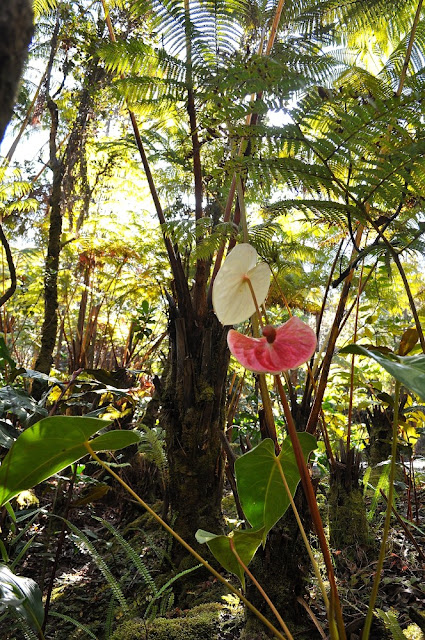 We flew with Alaskan Air directly to  Kona from Oakland International Airport (OAK) early on Thanksgiving morning. The drive took us about 45 minutes since the roads were empty given the holiday. The parking was  reasonable and even though the long term parking lot was full, they allowed us to park in a closer, shorter term lot for the same price. I thought this was pretty decent of them. Overall, OAK proved to be as handy to us and cheaper than SFO. The terminals were nice and easy to navigate.

I wasn’t quite expecting the singing girls, in grass skirts, handing out garlands of flowers on our arrival,  (though a tiny part of me hoped that all that those old Elvis movies, from BBC2 on rainy Saturday afternoons of my youth, would be played out upon our landing in Hawaii) but I was totally unprepared for the airport at Kona on the Big Island.

Passengers sheltered from the sun and rain under canopies in wall-less departure lounges. 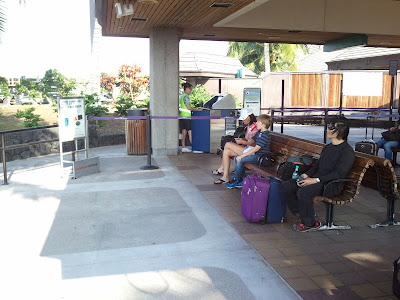 From here you could comfortably watch planes take off and land. 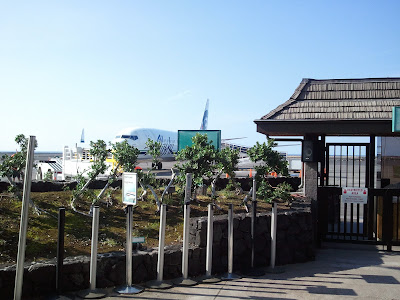 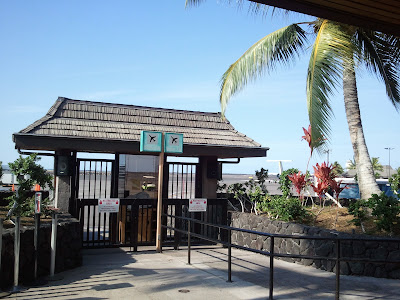 The open air gates reminded me of the toll booth in Blazing Saddles!

Alaskan Airlines charges for checked bags. The Big Island of Hawaii has 11 of the 13 climate zones that exist on earth and we had planned to visit all of them so we needed to pack warm clothes as well as just bikini, sarong and toothbrush! Our one checked bag was waiting for us at the baggage carousel and we went straight from their across the road to the Hertz van waiting to drive us to pick up our rental car.

I was amused by Hertz’s offer of a free “upgrade” from the compact car we’d booked, to either a mustang convertible or a minivan! Apparently compacts were in short supply.  We politely turned down the gas guzzler “upgrade” and waited the 15 minutes until a Toyota Corolla became available. We planned to do a lot of driving beginning with a three hour drive to the town of Volcano, on the doorstep of the Hawaii Volcanoes National Park.

The temperature fell from a humid 80F to a chilly, damp 60F as we climbed up through the coffee belt to the rainforest. Vines, ferns and unfamiliar vegetation thronged the sides of the road – so much of it that it felt like if you turned your back it would engulf the road too. 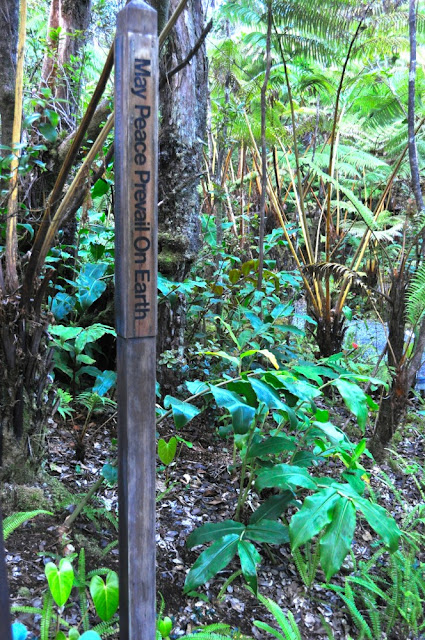 We stayed in the Forest House at the Rainforest Retreat, Volcano and I cannot write enough good stuff about this idyllic spot. 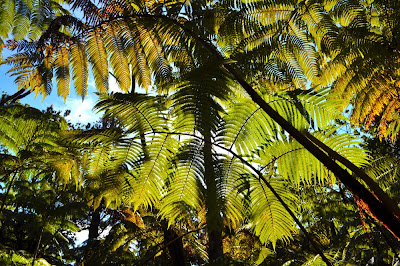 Anne met us as we parked. By the time she had guided us beneath the giant tree ferns to our home for the next three days, I’d already fallen in love with the place.

Anne got us settled in and gave us great advice about how best to view the volcano. The house had maps and she outlined a possible hiking itinerary for the following day and recommended Thai Thai Resturant in Volcano for dinner that night – possibly the best Thai food I’ve ever eaten!

She gave us her phone number and told us to call her if we needed anything. Feeling completely pampered, we used the last of the daylight to explore our new found paradise. 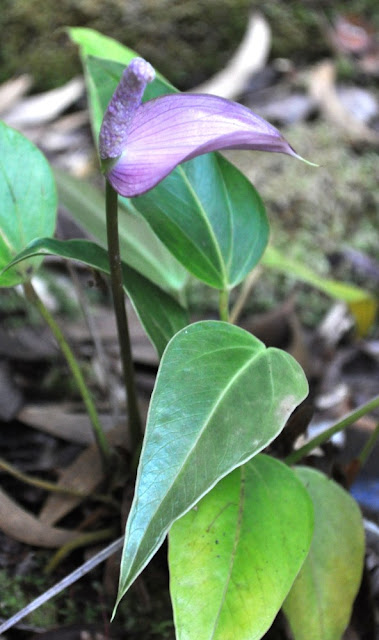 Anthuriums abounded in different colors and size, growing wild in the forest. 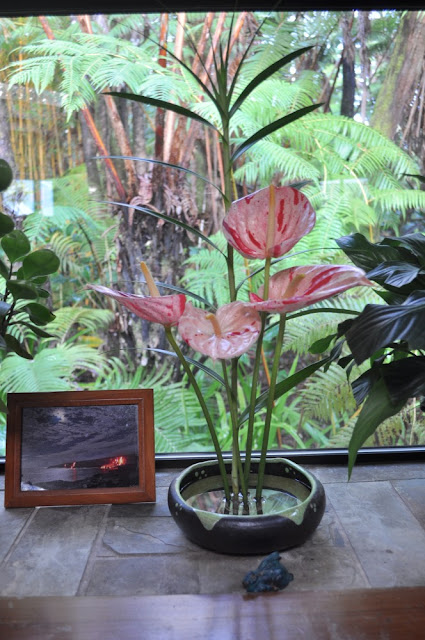 They made beautiful flower arrangements inside and out. 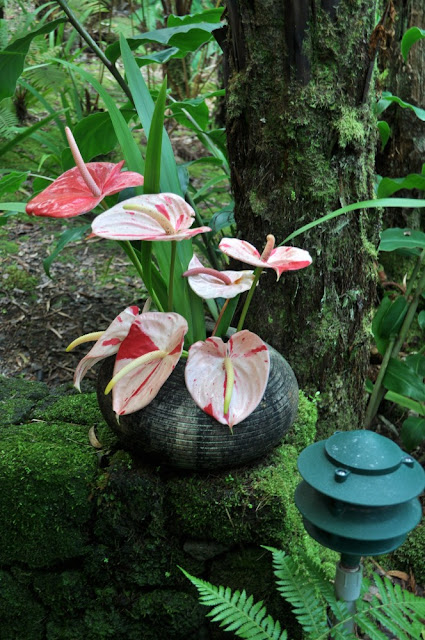 Beauty soothed the soul wherever the eye fell, and to sooth the body we had the use of a hottub, right in the forest. 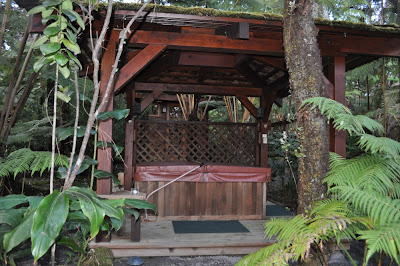 Nestled in the rainforest this hexagonal shaped cabin had everything we needed – robes to keep you snug to and from the hot-tub, flip-flops, torches (it gets really pitch-black at night), and umbrellas.

The continental breakfasts were huge – the bananas like none I’d ever tasted – so delicious! We had enough breakfast left over to bring with us on our hike for a picnic lunch. 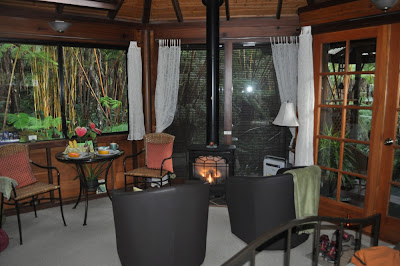 When night fell, black and inky around us obliterating the beauty of the rainforest, the cabin became a cozy haven as we tucked up in front of the gas fire watching dvds about the volcanoes so that relaxation battled the excitement of knowing that tomorrow we would see a real live volcano….