If there was ever an invention from Start Trek that I wish really existed it would be teleporting. That way I could live here in California but spend a every second weekend in Ireland with my family, and then take another couple of weekends to further explore Taipei.

As it was, we did plenty in Taipei in the weekend that we did have. That was back in January – how time flies. I’ve started working now and my weeks are a delicious blur of busy, resulting in me having more than ever to say on my blog but less time to write it!

So… back in January…in Taipei…’Twas a rainy day but that didn’t spoil the fun. Our Nephew had the brilliant idea of getting a taxi for the day. For a reasonable sum of money you can hire the taxi to take you around the city and beyond for as long as you want. The Driver will wait for you. If you get one who speaks your language he’ll act  as a sort of tour guide and suggest places to go also. We found our guy through a poster in a taxi. The sign was in Chinese but my Nephew acted as interpreter, (and also insisted on paying which is why I don’t know for sure how much it cost – they do spoil us!) but it is possible to get English speaking drivers too. You’ll know when you see a sign posted in a a taxi in English. I’d imagine the hotel concierge will also be able to help you find one.

The first place we visited was a small sea-side town called Danshui. In hindsight we realized that it was a bit far flung for the taxi tour and we’d have been better to locate our stops closer together, but my Husband’s family wanted to show us this delightful spot and we were happy to go. You can also get here on the MRT (the commuter train system in the city).

Or if you feel brave enough, scooters are a very popular mode of transport in Taiwan. 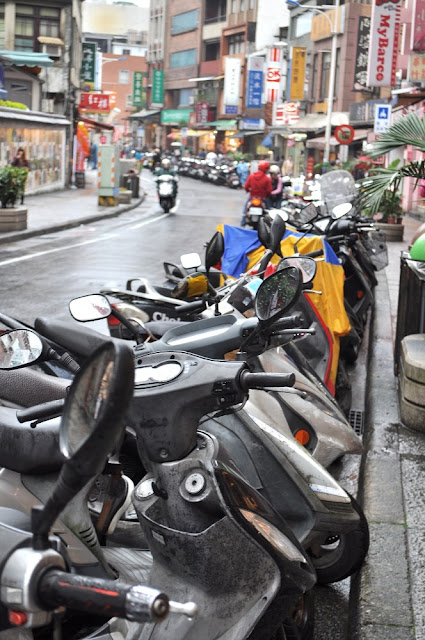 Nestled among the modern buildings, temples showed off ornate carvings and bright colors creating quite the contrast. 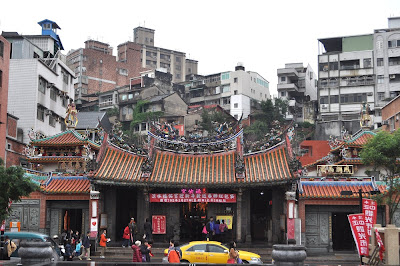 I particularly liked how they painted the utility boxes on the street. 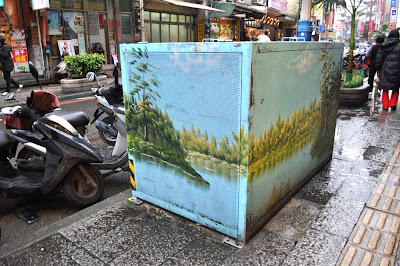 Perhaps because the rain dampened the view, the big attraction here was the street food – the rain did nothing to dampen our appetites! 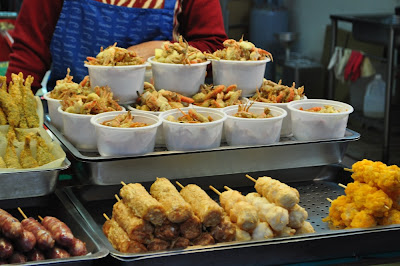 In the picture above, the prawns and crabs in the round dishes are deep fried in batter. Their shells are soft and you eat those as well. It seemed strange to me but I never back dawn from trying new food. It tasted delicious and I’m told they are a good source of calcium. 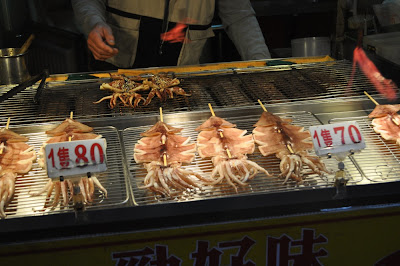 If you love seafood this street food is pure heaven. 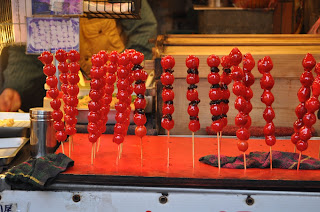 Above, candied strawberries! If you think candy apples are good you have to try these. 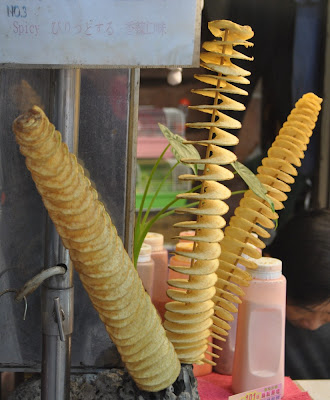 These are spiral cut potatoes. Crisps on a stick! (For the US readers, crisps are what you call potato chips.) 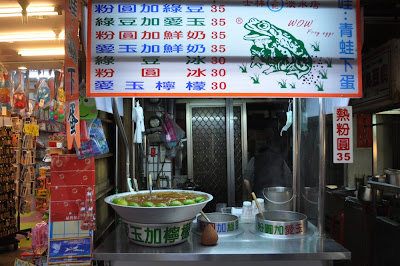 I didn’t feel compelled to try this one and no-one suggested it – maybe next time? 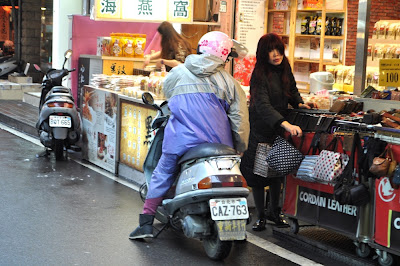 Where else could you find a drive through handbag store?

From here we drove about thirty minutes to our next stop – Shifen waterfall. There are lots of waterfall in Taiwan, so it would be possible to do a dedicated waterfall tour. This was just a taster.

From here we went to Shifen Village. Oh My goodness I could have spent a weekend here. It was so quaint and you felt like you’d stepped back in time. The village was built on a railway track and people were releasing lanterns from the tracks. 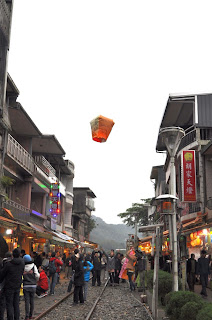 I asked if these would start fires and was told that while the flame is going the latern has lift, so it doesn’t land until the fire is out. The physics made sense to me.

We went into a store to buy one. You have to write your wishes on the lantern. They gave us a paint brush and black paint and we set to work. While we were doing this, we heard a loud engine sound and a whoosh. A train had just passed literally inches from the door of the shop. I’d assumed that the tracks were no longer in use what with all the commotion on them but not so! I ran out and managed to get a picture of the train as it disappeared out of the village. 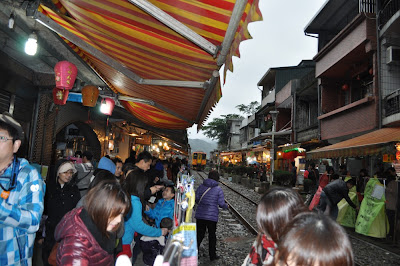 Back on track, quite literally we sent our wishes to the heavens – not least of which was that we’d have many good adventures together in the future. 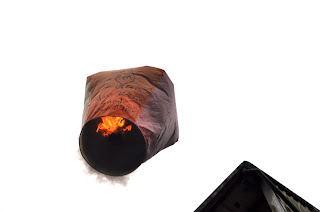 Next post I’ll tell you about the trip to Taroko gorge.

1 reply to More about Taipei