Mileage  218 miles States – Utah, Colorado, back to Utah
This morning I regretted pre-booking accommodation for the next 5 nights. It left me feeling tied to a schedule, not that we had wavered much from our schedule to date, but I was on the brink of canceling the Yellowstone portion of the trip and just staying amongst the red rocks of Utah.
Alas, the bookings (bar one – ya gotta love www.booking.com) were non-refundable. We had to go… In fact, part of what was putting me off was that the 3 nights (over the weekend, worst luck) in Yellowstone were booked with a place that had terrible reviews. At $175 a night, you’d expect a palace, (well, I would!) but this place does not look inviting. We just weren’t prepared to fork out the $350 a night for the next available option!
So we hit the road again, following the Colorado River. I’ve grown very fond of this river. If it were a person, I’d imagine it as a weathered old western miner/prospector, with a beard, a floppy hat, a battered map in one hand and a quarry pick in the other – a crusty old guy with plenty of stories to tell. 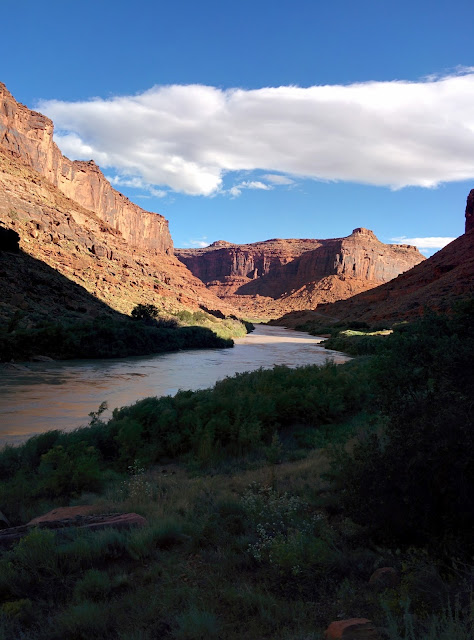 We stopped to take our last picture of the river and stumbled across this charming little campsite. 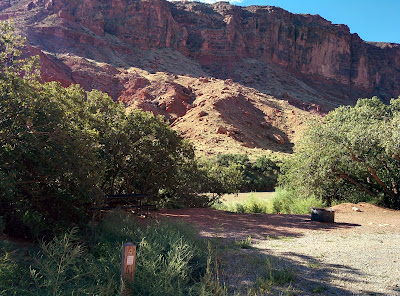 Utah has provided the best toilets everywhere we went. Even their long drops smelled nice – no kidding! But this little campsite had the cutest little convenience. A long drop with just a fence around it, enough for privacy but allowing you to stay in the fresh air! We did wonder how it would work on a cold rainy night though. 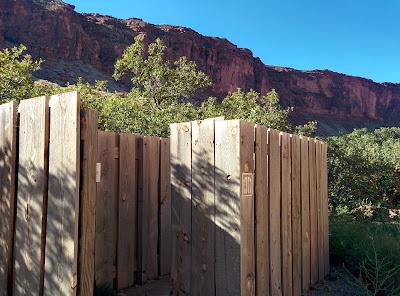 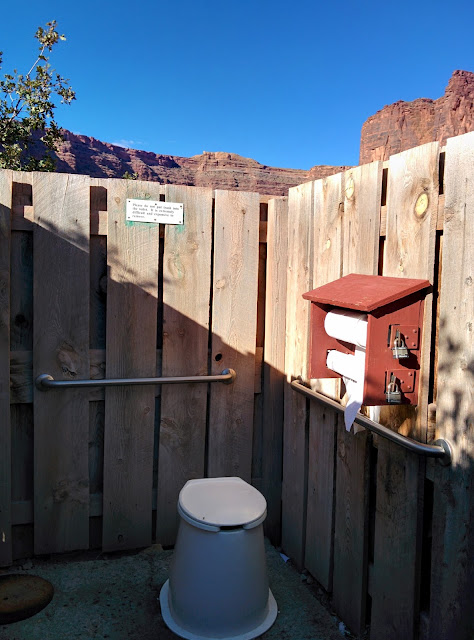 The scenery became much less dramatic as we left the red cliffs behind us. If we’d not been subjected to the splendors of Utah for the last week or so, we’d undoubtedly have oooed and aaahed over this, but now we could only describe it as “kinda nice!” 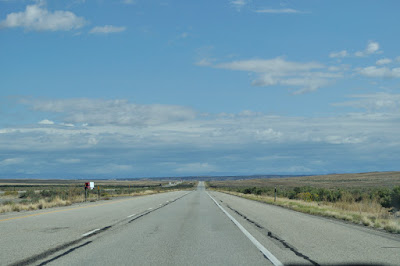 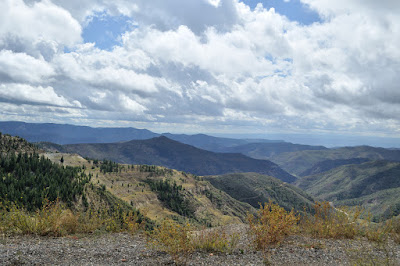 We dipped into Colorado and passed through a town called Rangely where everyone drove a pickup truck! We felt quite self-conscious in our little Prius. 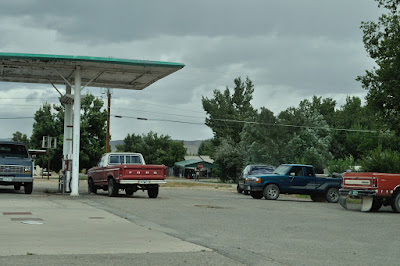 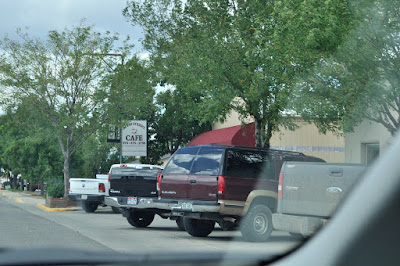 We were surprised to see oil rigs in this area… 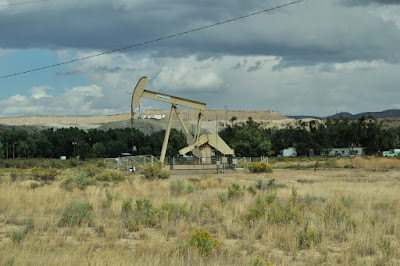 …but then realized that it made sense – we were in Dinosaur country after all. They even had a church for them! 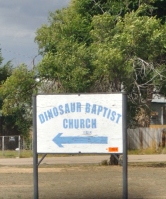 And a town hall…oh look another pickup truck! Maybe the wee dinosaurs ride in the back and the bigger ones use them like roller skates and put one on each foot? How else do they get to church? 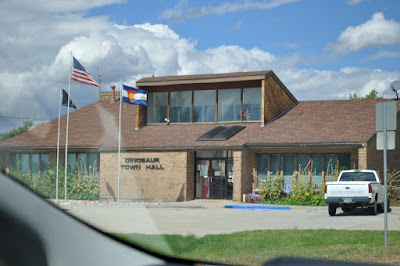 But this fella didn’t look too friendly! Perhaps it’s because he has no pickup – that digger in the background doesn’t look too comfy and the other dinosaurs at church probably laugh at him – poor thing! 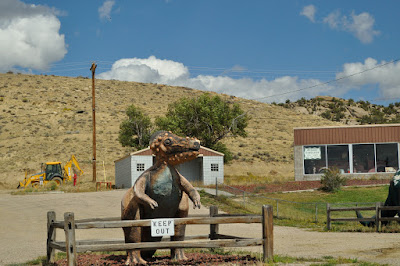 Dinosaurs were evident when we crossed back into Utah too. 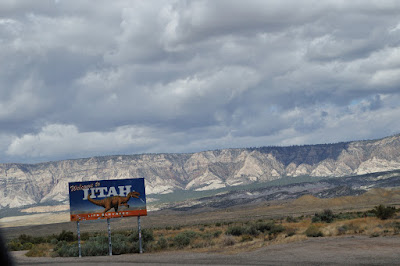 The highlight of the day was Dinosaur National Monument. 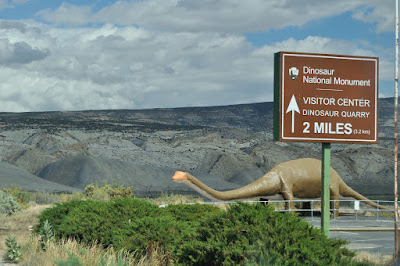 The National Parks and National Monuments have delivered every time and this was no exception. I felt like a 7 year old again as I revisited my fascination with all things dinosaur. I was especially impressed that we could see actual dinosaur bones and not just fossils. We were even permitted to touch them – so exciting! 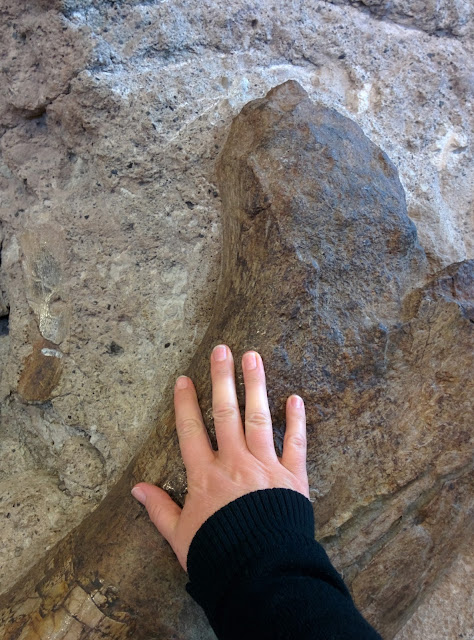 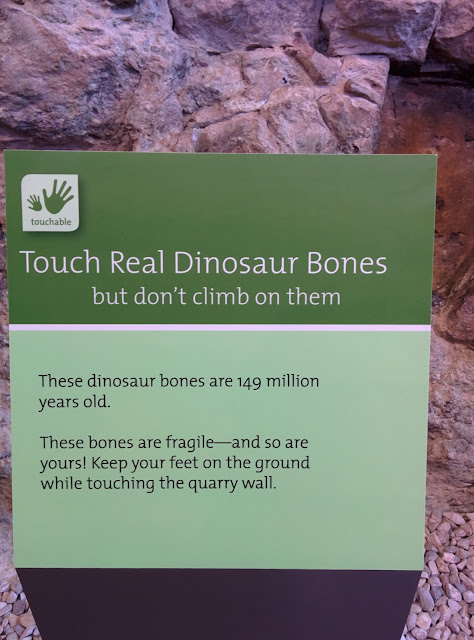 We got chatting to an English couple, and it turned out that one of them had gone to University of Ulster in Coleraine, on the North Coast of Ireland, the same place as My Husband. The two alumni were thrilled to meet so far away from home. What are the odds? Nearly as low as a whole bunch of dinosaurs all dying in the same place (possibly from dehydration as the climate changed and the river dried out) and having their bones preserved for millions of years. Or possibly 3000 years ago, as I overheard one lady explain to the people with her. That made me chuckle! 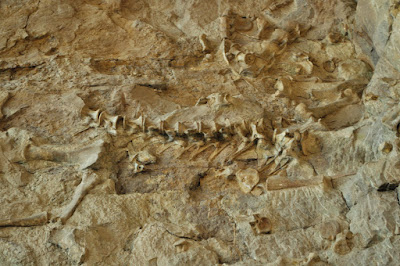 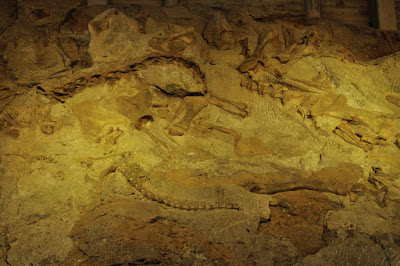 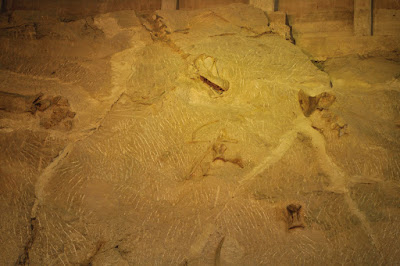 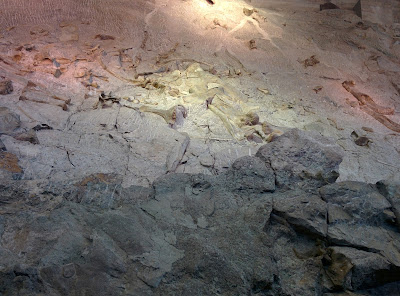 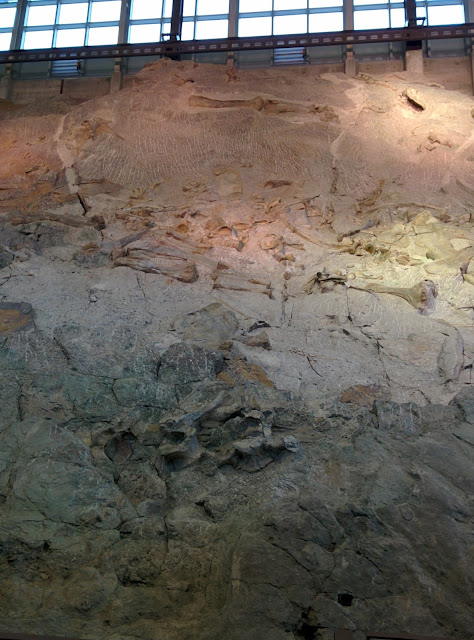 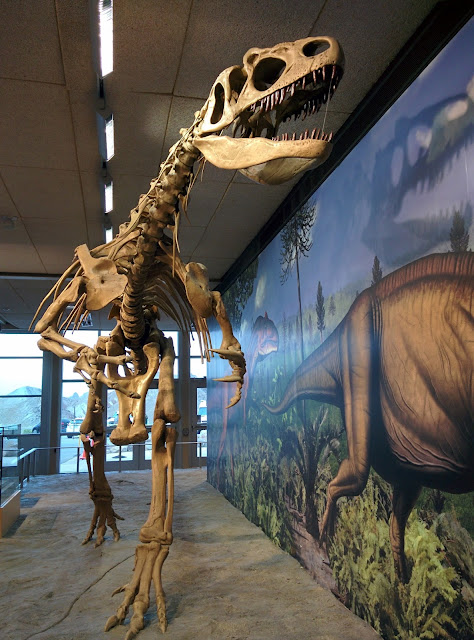 That night we stayed in the nearby town of Vernal/Naples. 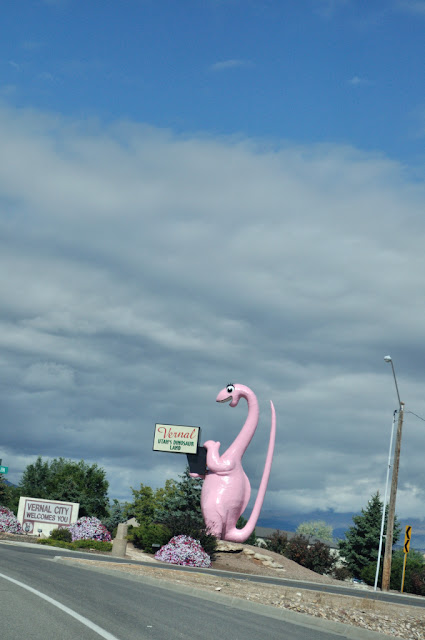 The hotel here was beautiful – the Microtel Inn and Suites by Wyndham. Such luxury! Got to make the best of it before we get to that place in Yellow Stone the night after next. Maybe there wasn’t much to look at out the window, but I did have the best night’s sleep ever, and you can’t look at scenery when you’re dreaming about dinosaurs and rivers that take human form!