This was the last day on the open road. Tomorrow we would jump on the nearest interstate and barrel back to San Jose without time for stops or photos.

But we still had one more day and no better way to spend it that to visit volcanoes, or what’s left of them after they blew their top.

Recent fire activity in the area was very apparent along the road between Bend and Crater Lake National Park. 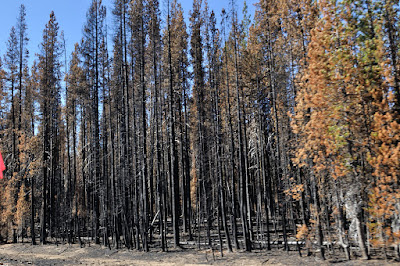 First stop – Crater Lake, formed when a huge volcano called Mount Mazama erupted in 5700BC and then collapsed in on itself. The eruption threw up 150 time more ash than Mount St Helena’s 1980 eruption. The resulting Caldera filled with water. It has no rivers that run into it and its only catchment is direct precipitation. It is the deepest lake in the USA.

It is huge. I couldn’t even get the whole thing in using my panorama app on the phone (without the image getting warped.) 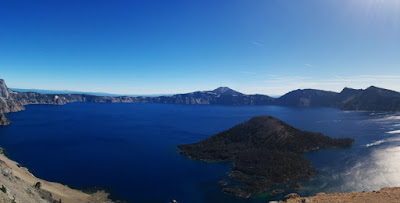 Can you imagine being the first person to find this? There is a place called discovery point, where the first European came across it. Of course, he was not the fist human to find it since there were people already living here – a fact conveniently glossed over far too often. Even so, I tried to imagine what it must have been like to climb up the rise and see this for the first time if you hadn’t expected it to be here. It was pretty impressive even from a car and knowing there was something here.

Inside the crater, Wizard Island is the tip of a drowned volcano that rises from the lake floor. You can take a boat trip out to it, or swim! 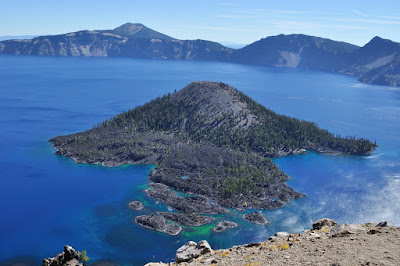 Phantom Ship Island is the other island in Crater Lake – wonder how it got its name? 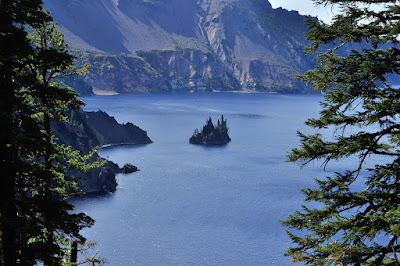 We had a lovely lunch sitting by the log fire at the Crater Lake Lodge, Rim Village then we had to get back to the road.

Even before we left Oregon, we could see Mount Shasta peeking over the horizon as if to welcome us home. 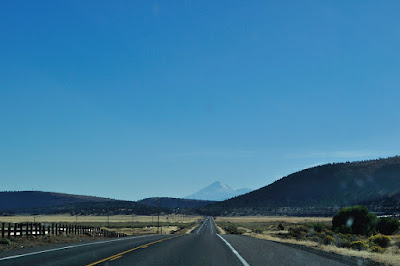 Honestly the sign says “Welcome to California” but the windscreen was so icky that the camera could not focus on anything but smeared bug! 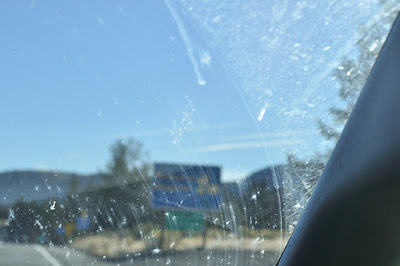 As we got close to Shasta City, the volcano of the same name stool sentinel on the road. 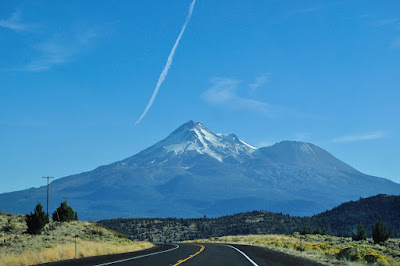 Mount Shasta is still a live volcano. It erupts, on average, every 600 years. The last eruption was 200 years ago, so I doubt I’ll be around when it blows again, thank God!

With the moon tucked in on its left flank, it does present a very tranquil sight. 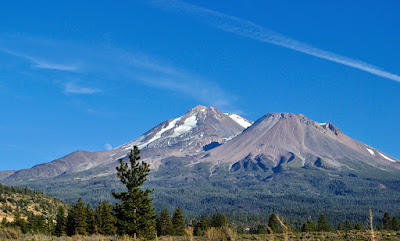 Shasta is close enough to where we live to consider coming back for another trip. It was a nice thought as we packed up the next morning and drove to Interstate 5 to take the last part of what has been an epic journey for us.

When we got home and checked the total mileage we discovered that our little Prius had driven 4004 miles in two weeks. What a great little adventurer!

We were home safe and sound, with a camera full of pictures, heads full of happy memories and hearts full of gratitude. 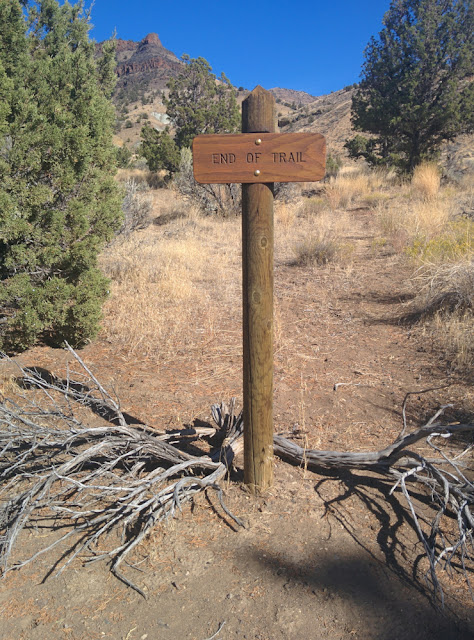