Usually a great way to see a city is to go on a hop-on-hop-off bus tour of the city. I’ve done them in New York, USA, Edinburgh, Scotland and Cambridge, England and really enjoyed them, so it seemed like the obvious choice here. “Choice” being the operative word!

Basically, we choose wrong. I’m sure there is a great tour available in Singapore, but we we picked the Funvee Hopper two day City Tour. There are two routes and buses were not very frequent, 15 minutes on one route (not too bad) and hourly on the the other route. The commentary was hard to hear and pretty naff! It seemed like they were more concerned with gimmicky jokes than imparting real information (this tourist lark is a serious business you know!) We also found that we really only had time each day to stop at one attraction – that’s more about our ability to faff about than the tour companies fault, but the bottom line was that it is better value to buy a Nets Flash Pay card for the public transport to access places than to spend S$27 for a the two day tour hop-on-hop-off bus. There is also tourist passes that give unlimited travel on buses and trains for 1, 2 or 3 days, but we decided to see how much we used the system before committing to that. We spent about S$12 each in 8 days which worked out way better than the 3 day tourist unlimited pass priced at S$20. Public transport in Singapore is cheap, clean and really reliable.

We began our tour at the Singapore Flyer. Even before we got on the bus, I spotted a Fish Spa – the fish eat the dead skin on your feet. I had to try it! 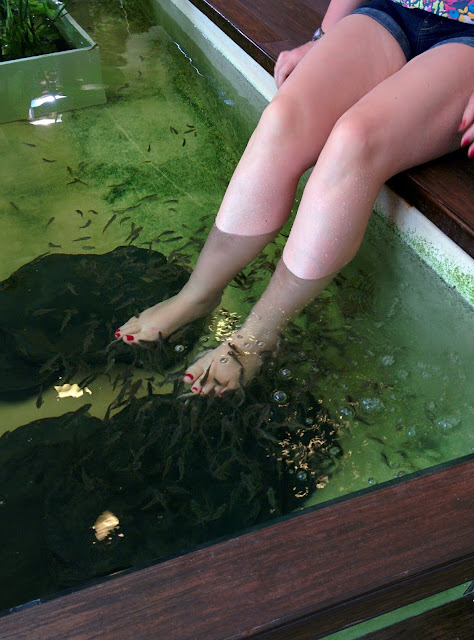 It tickled a bit at the beginning, but I soon got used to it. It seemed ironic that the fish were now eating me since I had eaten so much fish over Chinese New Year! 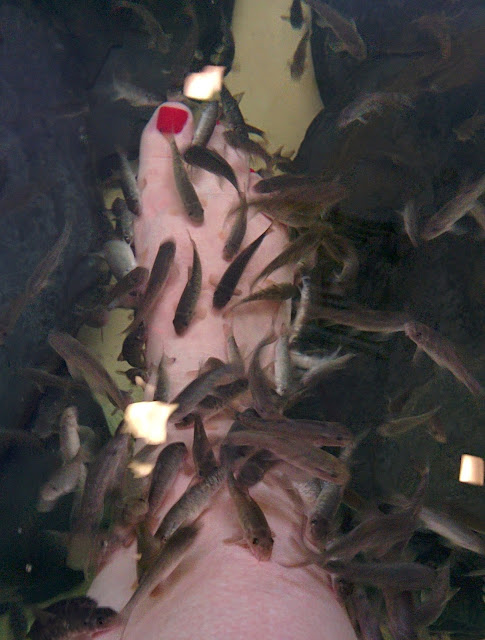 A couple of young fellas came in and were being complete wussies about the whole thing. They splashed and squealed so much that the lady running the show upgraded me to another tank with larger fish! 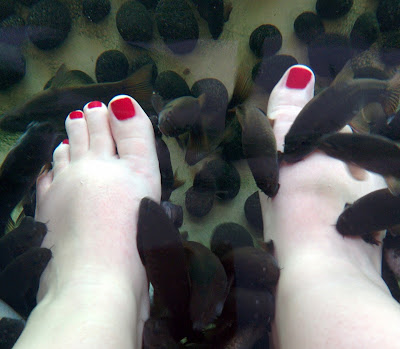 You could feel these fish chomping a bit more – a kind of rasping sensation rather that the tickle I’d grown used to. It was still nice though.

Back on the bus, now with the ultimate in soft feet, we decided the next stop would be our lunch stop.

I love to eat out and have a feast for the retinas as well as the taste buds, so when we spotted the Fullerton Pavilion perched on the side of the water looking up at the Marina Bay Sands, where we’d eaten the day before, I reckoned it was a nice place juxtaposition – little realizing just what a juxtaposition it really was! 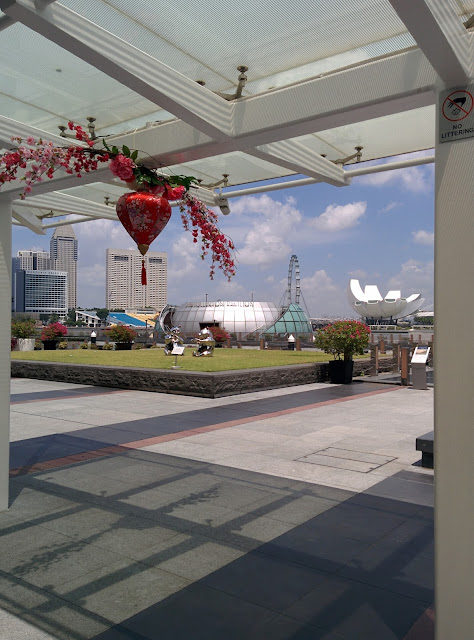 The menu was breathtakingly expensive, but what the hell, we were on vacation! So My Husband ordered the tasting menu – S$38. I opted for  the lobster salad, figuring that a big plate of salad leaves and perhaps a dollop of lobster would suffice – at S$25 – and if necessary, I could share some of My Husband’s lunch. The waitress did not seem impressed with my stingy move. The service was slow, but we did have a seat by the window – not difficult since we were the only ones in the restaurant!

When my salad appeared, I was gobsmacked. A spoonful of lobster rolled up in some very thinly sliced avocado! The whole meal no bigger than a cigar – for S$25 (about $20 US)! 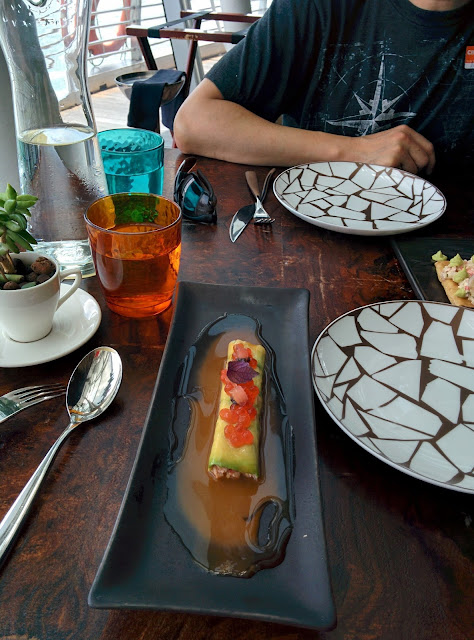 Well that would hardly fill a hole in my tooth! And when grumpy-pants (the waitress) brought the taster for My Husband, same thing – just a taste. The sea bass maincourse was about 1 inch by 1 inch by 2 inches. We had a cubic inch each. It hardly replaced what the fish in the spa had taken from my feet!

The bill was S$75 by the time you added service (I suppose grumpy service is still service) and a soft drink. We didn’t dare stay for a thimble of coffee.

You can’t win them all!

Next day we went back on the bus tour but ate lunch at a mall food court to increase volume and decrease expenditure. The tour showed us views of different districts around Singapore, including China Town and Little India, but we didn’t get off the bus until we got to the Singapore Botanic Gardens. It had taken us quite a while to get here, and we didn’t want to miss the last City Tours bus back, so I feel like the visit was rushed. It was well worth seeing though.

My favorite part (of the limited amount that I saw) was the Evolution Garden. It begins with the story of the earth forming as rock and then describes, with plantings the progression from mosses, through the plant phyla, such as ferns through the evolution of gymnosperms (conifers) to flowerings plants. 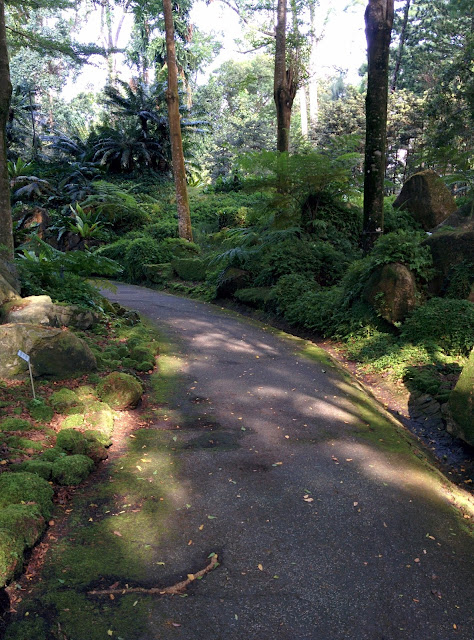 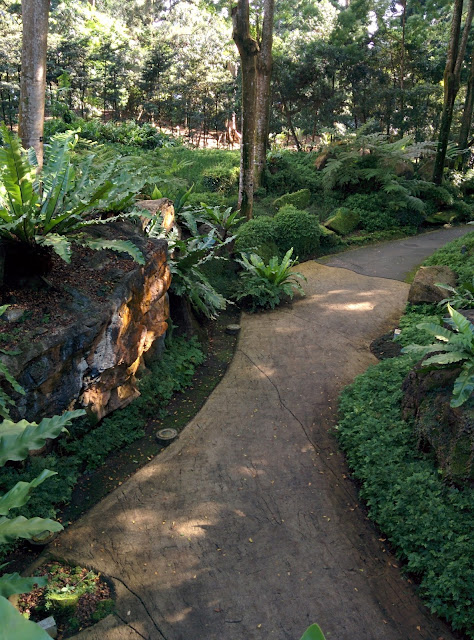 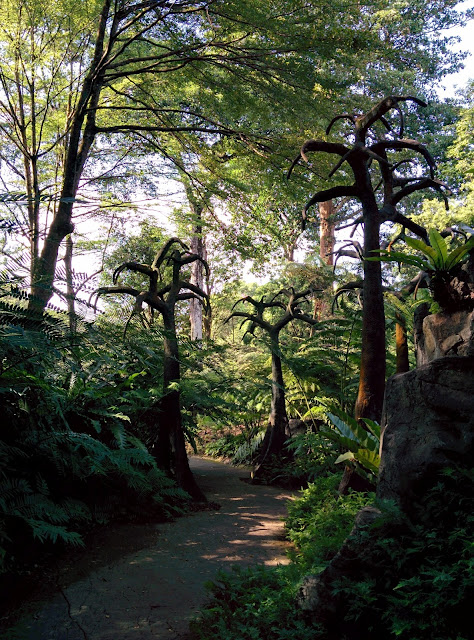 I loved these petrified tree stumps that have been polished up – appeals to the denrochronologist in me. That was my first real job when I graduated from University, dating nearly as far back as these tree stumps! 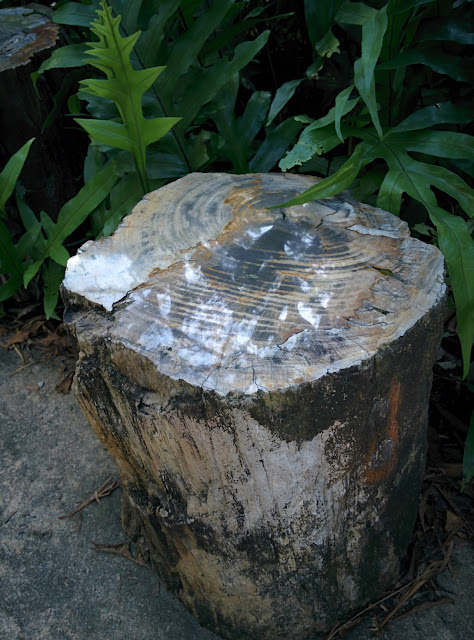 Despite the lunch at the Fullerton Pavilion, Singapore continues to delight and surprise us – so much to see…

1 reply to The Singapore Chronicles – How Not To Have Lunch In Singapore!