Port ship actually docks at: Tenders near Nathon Town
Attraction/Town you are aiming to visit: The whole island has lots to offer
Distance from Port: You can walk off the tender and you are right there – beaches, town and taxis readily available
Mode of transport we used: local taxi
English spoken by locals: yes
Ships tour necessary? no
Hassle from merchants and taxi drivers: none

Our last port of call was to a beautiful island paradise off the coast of Thailand. Here we had the pleasure of sampling Thailand’s famous hospitality and welcoming locals. 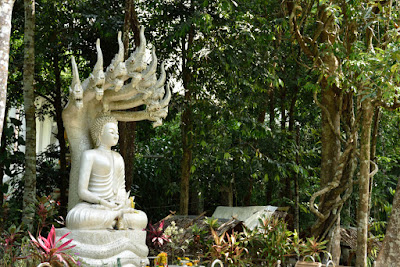 The tender docked in Nathon town and we walked to the Tourist Information center. Here’s one last illustration of the comparison of what the ship is prepared to tell you about the port of call compared to the information that is freely available onsite.

The ship’s vague map of the island, that we attempted to work from initially. 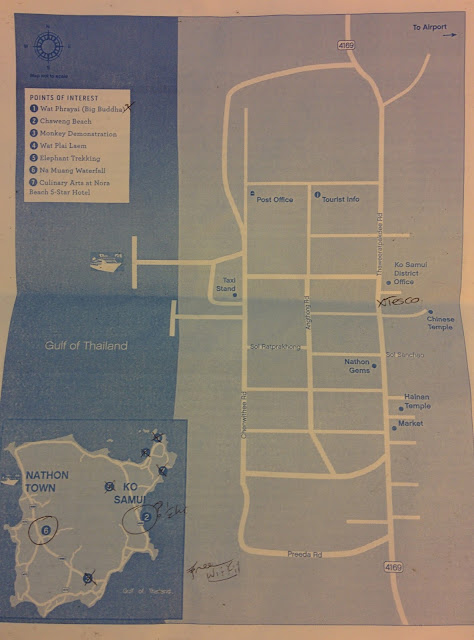 You’ll see the tourist information office on the above map. We walked straight there after getting off the tender. They were really friendly and helpful – here’s the free maps of the island they gave us. 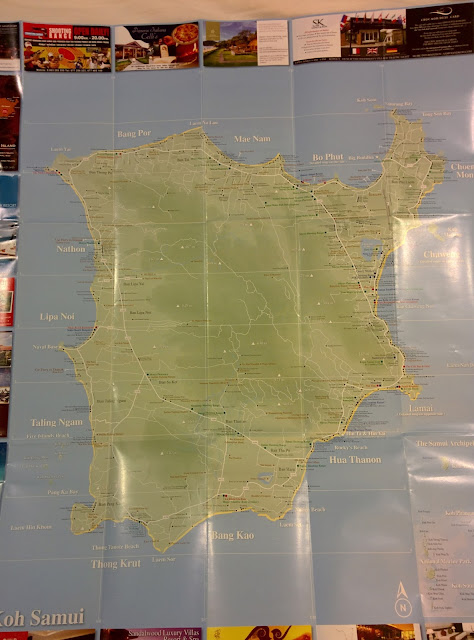 While we were in the Tourist office, we met another couple from the ship. After a brief discussion of what are goals were for the day, we decided we were a good match to team up to hire a taxi for the day. For around US$40 (1500Bhat) per couple, we hired a taxi for 4 hours. Taxis are considered expensive here, but still far cheaper and more flexible than a ship’s tour.

Armed with the kindle copy of the Lonely Planet and the maps, we set out to explore. Our first stop was a hike to a waterfall.

We’d gotten side-tracked at the beginning of the trail and had wandered up into a pretty little temple (photo at beginning of post) but then got our bearings and headed up river to find the waterfall.The taxi driver said it would take us 15 minutes, the guide book said 20 and people we met on the trail said 40 minutes. We walked for 20 minutes uphill, saw lovely scenes of water flowing over rocks but no evidence of a stunning waterfall. Having satisfied our itch to stretch our legs, we turned back aware there was lots more to see on this beautiful island. 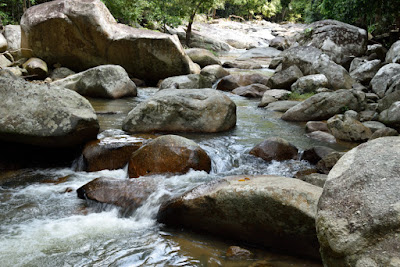 Our next stop was at a collection of stone carvings that a man who had retired here had done. They really were amazing and we pottered about here taking pictures for a while. 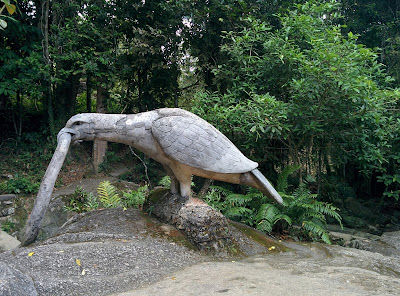 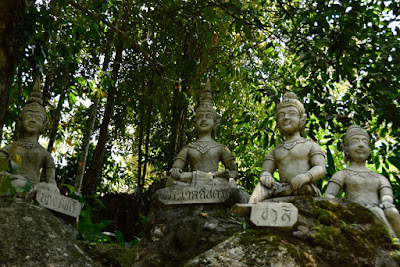 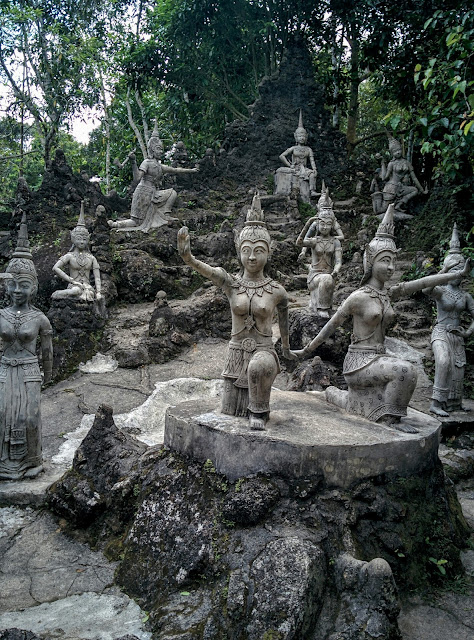 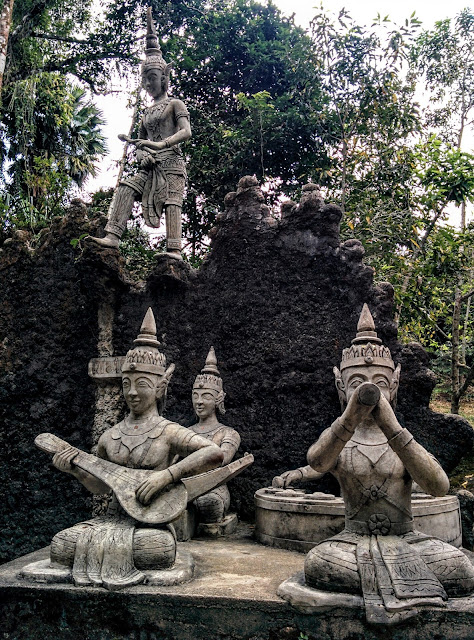 I think our driver enjoyed the exploring too. We went to the highest point on the island and he claimed he’d never been there before. He joked that I was showing him around. At this view point we discovered these rather random statues of animals. They included ones of dinosaurs too. They had no apparent theme. Very bizarre! 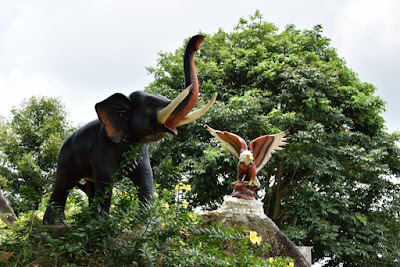 Up here, we discovered a pool and you could pay to sit here by the hour. Good to know but we were in exploring mood, not relaxing mode. 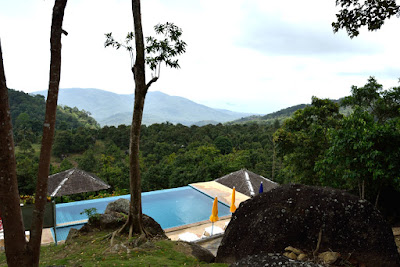 There was also a restaurant, but the owner told us he was closing for a private function. We were cruise people – we knew we wouldn’t starve too quickly. It gave us the opportunity to sample the packet of potato chips we’d purchased at the stone statue’s “gift shop.” Yummy! 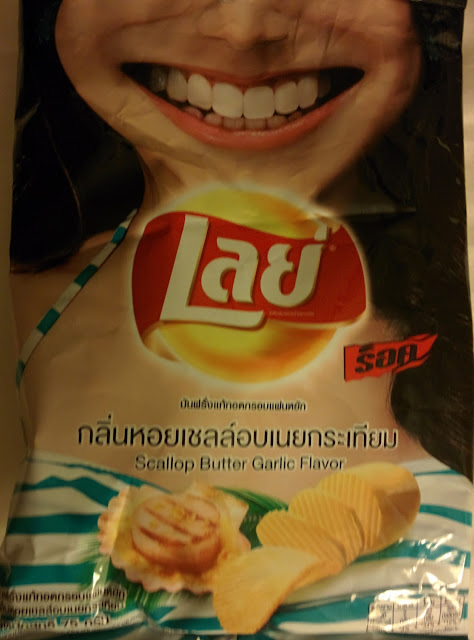 We explored the whole island over the course of four hours and stopped for lunch on the beach – as ya do! The other couple went off and had a swim before our driver brought us all back to the tender. It was a pretty blissful day.

The line to the tender was enormous. We decided to have a look around the local market stall not far away while keeping an eye on the tender queue. These delicacies were on offer – bugs! 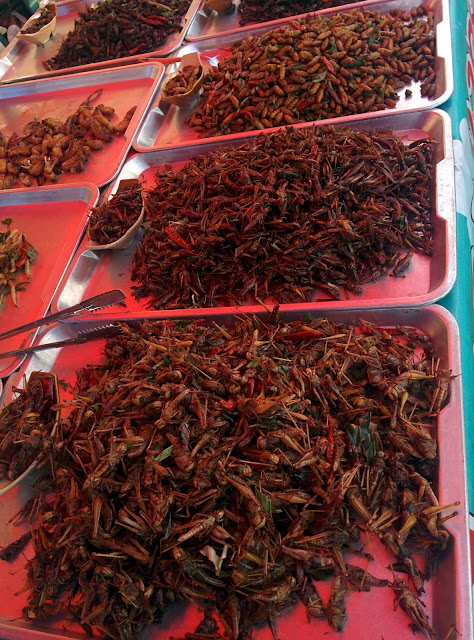 If I’d had a little more time I might even have worked up the courage to try some. 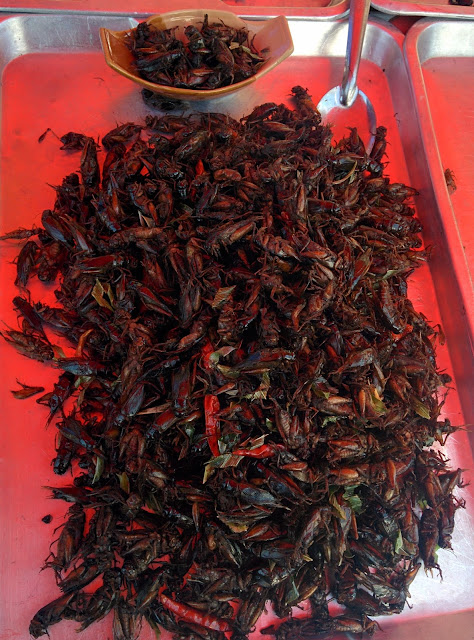 But a gal needs someone to guide her in bug-eating etiquette! 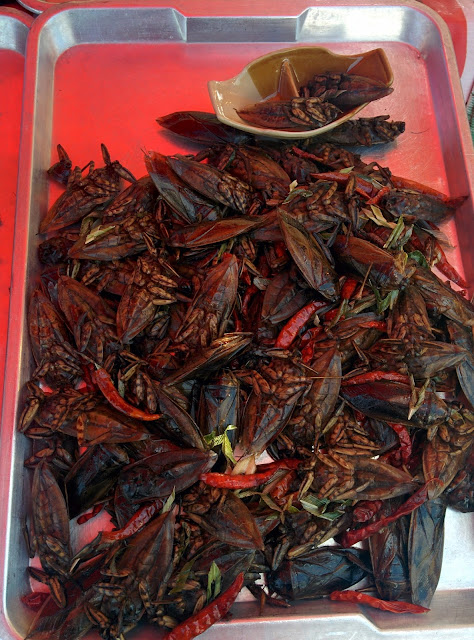 I mean, one wouldn’t want to be spitting out wings if that was not the done thing. The red peppers might cause me more issues though! 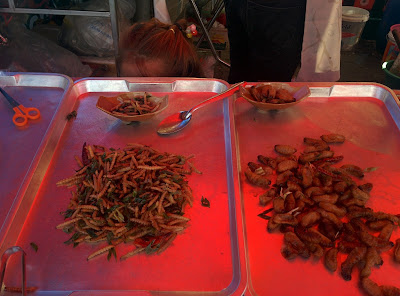 I’m sure these grubs would taste just like prawns…or snails maybe!

But the tender line got short very quickly (honest, it did) and we had to dash back to catch our boat to the ship where we watched another glorious sunset after another fabulous day. 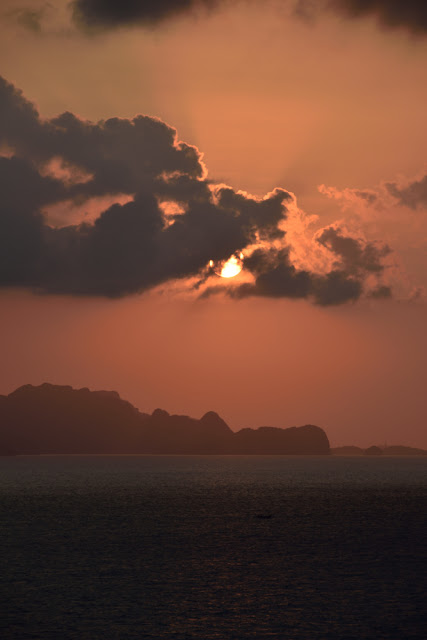