It’s been a brutal summer for fire-fighters in California. Huge wildfires up and down the state have wrecked havoc on people’s lives and without the brave folk who fight and manage those fires there’s no doubt that many more lives would have been lost and much more property destroyed.

Air quality in the San Francisco Bay Area has been the worst I’ve experienced in the eight years we’ve been here. The massive Soberanes Fire, just south of Carmel and 70 miles to the south of San Jose pumped out tonnes of smoke that were blown north getting trapped in the Santa Clara Valley. Even Hearst Castle was at risk at one stage when the fast moving Chimney Fire’s flames licked to within 2 miles of the tourist attraction.

Meanwhile in Louisiana, massive flooding devastated the state this summer. Like all things in nature – enough water is valuable but too much is a disaster.

Surprisingly, the same can be said about wildfires. Not all wildfires are as destructive as those mentioned above. Wild fires are a natural phenomena in California that even aids native plant growth.

For the past few years, I’ve been very lucky to have been employed on a seasonal basis by Creekside Science, a conservation agency. One of the projects I help out with is population monitoring of the endangered Bay Checkerspot Butterfly in the hills east of San Jose. This is private land, and I consider it a privilege to get to go up there with the Creekside Staff, not to mention just how much fun they are and what a joy it is to work with them.

So I was concerned about my friends when I learned that here was a wildfire on that land. Upon checking in with my friend, she mentioned that she needed to go up have a look at it and I jumped at the opportunity to go with her.

It did look bleak with so much blackened vegetation.

The wildlife seemed very discombobulated. I nearly stood on a jack rabbit that had blended into the soil such that my foot was right over him when he decided to bolt, making me yelp and my buddy jump as a result of my yelp. Too fast for me to get photos off it, he wasn’t the first animal we spotted, but unfortunately I didn’t get pictures of those guys either. 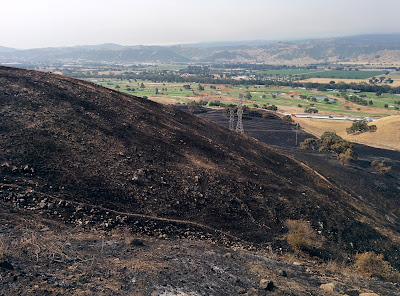 Down in the valley, below a huge black boar/wild pig raced for non-existent cover. Not that he needed it, as his dark brown coloring helped him blend into the background. 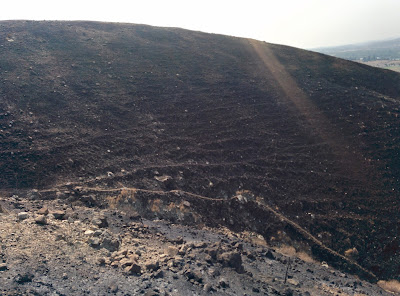 We nearly took flight ourselves when a sharp hiss followed by an unearthly menacing rattle warned us to stay away from a very pissed off rattle snake. We didn’t need to be asked twice as we took off at breakneck speed in the opposite direction from the two foot long reptile. I haven’t have such a big dose of adrenaline in a very long time.

My feeble suggestion to go back, get a picture, was met with a raised eyebrow. I decided no.

On closer inspection, it was interesting to see how the fire had skipped over some places leaving patches of vegetation in swaths of blackened grass. 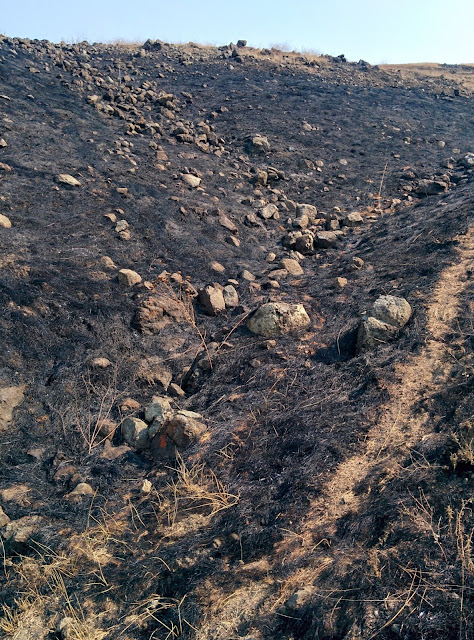 This is where the fire can benefit the California natives. It clears out all the (mostly non-native) plants such as grass. The natives, dormant and in seed at this time of year have more room to grow when the rains come and germinate the seeds. In fact, the fire even helps certain seeds to germinate. 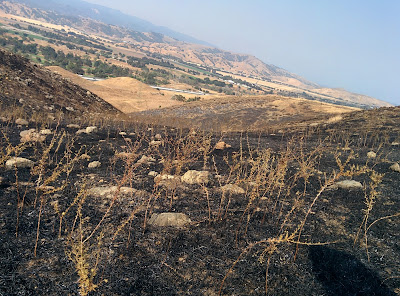 In the pictures above and below you can see some native flower seed-heads that have escaped the burn. In the background of the photos below the green of the golf course looks so vibrant, yet ironically it is more harmful to the Bay Checkerspot Butterfly than the fire, because it disrupts their habitat and doesn’t support the plants the Bay Checkerspot needs to feed on. 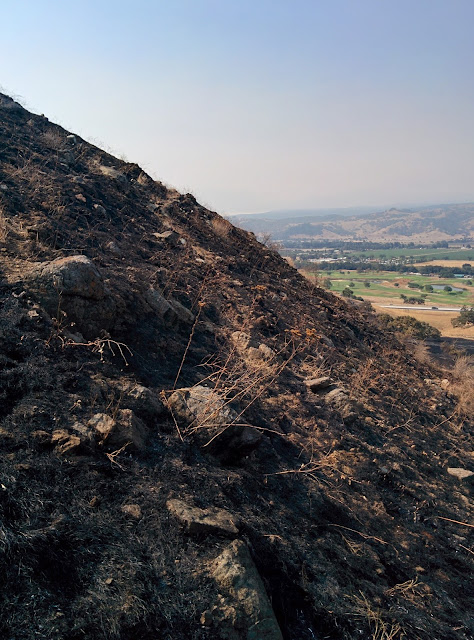 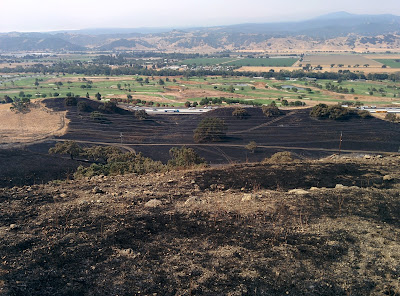 At first glance the fire seemed all consuming, but up close you could see that while the vegetation was scorched and burned, the soil wasn’t. Here is where the caterpillars are hiding until the rainy season… waiting for their food sources to germinate and grow. 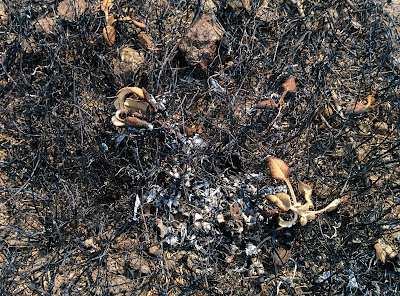 Monitoring the population next year will give us a better indication of the impact this fire may have had on the butterfly population up here.

Sadly, fire is understandably frightening for us humans. We stop it and in doing so that can actually cause more problems further down the line. In the case if this grassland fire, the methods needed to stop the fire are destructive for the local flora. Fire beaks, where the land is plowed up, destroy delicate habitat and mash up endangered species. 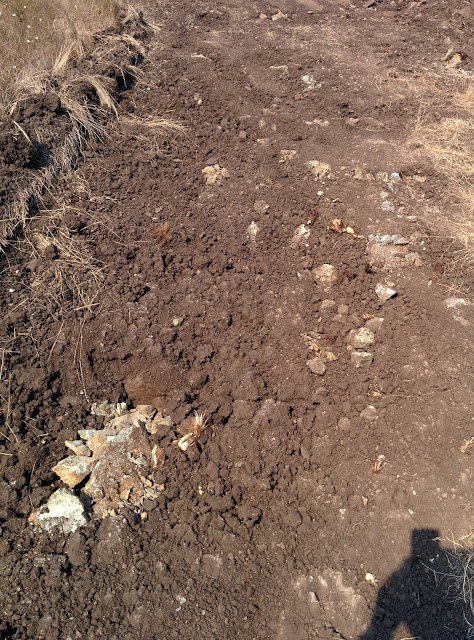 Fire retardant (red chemical dropped from the air) on serpentine rock provides the soil with high levels of phosphates which encourage the growth of non-native, often invasive, plants that choke out the native species, leaving the butterflies without food. You can see the reddened areas in the picture outside the fire zone. 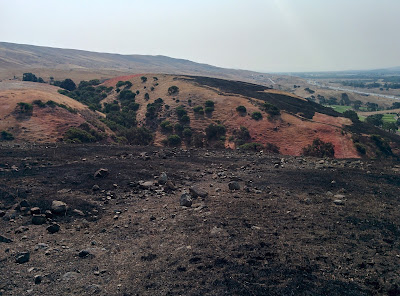 By preventing fires in the past we’ve actually caused more problems for ourselves. A build up of undergrowth and unburned forest material means that the next time a fire hits its much fiercer that it might be naturally, so it burns hotter and damages more. Many of the recent big fires were caused by humans, but lightening can also start fires.

In California, fires will happen. Should we let them burn or not? Is it possible to manage them in a way that promotes harmony between us and the natural order? There are no simple straightforward answers to this. We humans need to live too. Figuring out how to do that, inflicting the least harm on our environment is one of our biggest challenges, but one we must address. 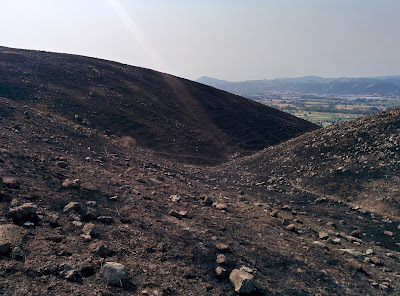 Even a grassland fire is scary to watch. A ferocious forest fire gobbling up mountainsides is terrifying. My heart goes out to the people in fires like the Rocky Fire in Clear Lake who have lost everything. My accolades go out to fire fighters everywhere for their courage and altruism and for showing us the best that humanity can be.