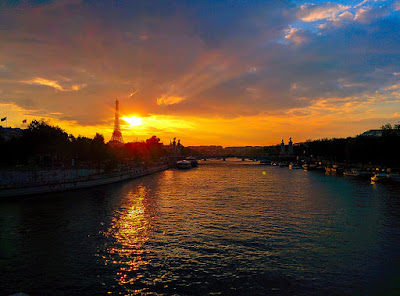 We landed in Paris mid-afternoon on a direct flight from San Franciso. Too excited to sleep on the plane, we were a bit disheveled as we gathered up the 4 fifty-pound check-in bags, 2 ten-ish-pound cabin bags, my hand-bag and My Husband’s briefcase – basically all the luggage we had shoved our personal life into to bring to Paris. There was a crate 4’x4’x6′ filled with Really Useful Stuff (toys for grown-ups like giant audio speakers, ski gear…etc) somewhere in the Atlantic Ocean, hopefully still on a ship, though after the recent hurricane activity we could not be certain!

We needed an Uber Van for all our luggage and got one easily enough. The driver even spoke some English, which was a bonus. I was so tired that my brain refused to be bi-lingual even to its limited degree.

A short forty minutes later, the van stopped at a street that ended in a row of bollards. We’d inadvertently chosen an AirBnB in a street that was a pedestrian prescient.The best plan of action was to unload all the luggage and one of us would stand guard over it while the other shuttled the cases up to the building we were staying in. Our AirBnB Host was going to meet us there…simple.

My Husband elected to be the runner. I was left standing in a rather unfortunate spot just outside what we later realized was a train station.

With my pile of bags, unkempt clothes from a night of travel and more tousled than usual frizz-bomb hair, I could easily have passed for a homeless person – which technically I was since we’d sold our home in California and had, as yet, no fixed abode in France!

My Husband arrived back, out of breath and sweating. The Host was there waiting with the other bags at the door. We carried the rest between us the couple of hundred meters to the building.

I greeted the guy with a fractured, “Bonjour.”

“Hello,” he replied. (Why did everyone do that? Obviously, I needed to fix my Bonjour…) “We are on the fifth floor,” he continued with  a rueful expression. “And there’s no elevator!”

In France the floor numbers start at zero. We had five flights of stairs to carry our 250 pounds of luggage up. My Husband took off  up the stairs at a clip with a 50-pounder in each hand, probably only about 25 pounds short of his own body weight!

I struggled up behind him with a check-in bag in one hand and the stair rail to drag me up in the other. I met him coming down again for the next load, his face dripping in sweat and tinged grey! He scared me. I thought, this was it. This was how our lovely story would end, with him dropping dead of a heart attack, and I’d have to go home to Armagh and live with my mother.

And get there we did – muscles quivering from over use and lack of sleep, we flopped onto the futon (despite requesting to only view AirBnBs that had real beds) and said to each other, “What now?”

We needed to sleep, but but first we needed to eat. At street level, a quaint French cafe complete with red awning called out to us. As soon as we opened our mouths the waiter twigged that we spoke English and produced an English Menu. We ordered and sat back grinning. We were in Paris!

Then My Husbands forehead wrinkled in a frown.

“Okay,” he said in a hushed tone. “Try not to react, but I just saw a mouse run across the floor.”

So the place was more rustic than quaint. Alright, it was more old and unkempt than rustic. I was too exhausted to really care, and sure what would you expect with all these old buildings? And hadn’t I grown up in an old house where we’d watched the mice play under the TV? For the record, Mummy and Daddy knocked it down and replaced with a lovely new house… where a mouse actually bit my Mum on the finger after she picked up cocktail sausages for a late-night snack and fallen asleep before washing her hands – the mouse wasn’t to know the sausage shaped digit smelling of sausage wasn’t actually a sausage!

I’d sat with my Dad as we watched mice run along curtains in the living room. I’d even kept pet mice…suffice it to say mice don’t bother me.

The worry melted from his features and we began to laugh. We’d survive a mouse visitation in the restaurant. We were in Paris. How could we complain? I was convinced that we could travel anywhere, live any place, so long as we packed the right attitude!

After dinner we took stock (in a non-complaining, giggling way) of our digs. We’d gone cheap, not knowing how long we’d have to pay vacation rental prices. In the cold light of the electric lamp in the corner (for some reason there was no pedant lamps in the center of the rooms) we could see the place was tiny but very clean. It was called an apartment but really it was a studio. It was also kind of weird. The cistern for the toilet looked like a scuba tank. 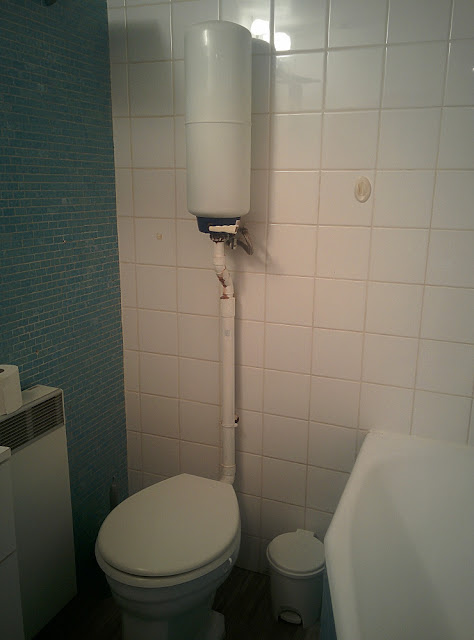 The bathtub must have been custom made. Not only was it extra short, but a piece had been sliced off it too, so it was tapered on one side. 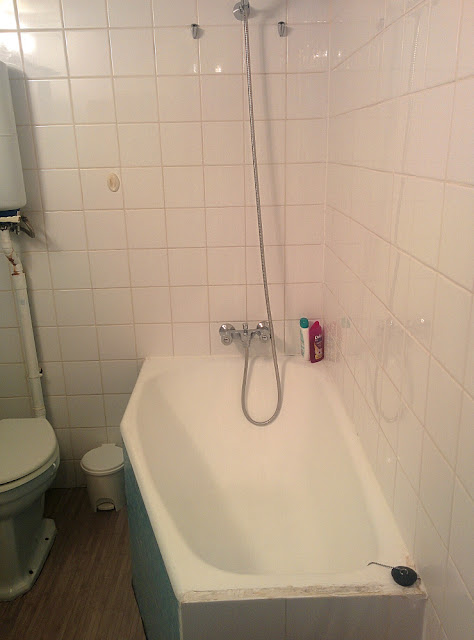 Strangely, the dining room table was huge…nearly as big as the bed (tucked into the corner of the living room) and the TV was massive – though all the stations except for a couple of News stations were in French. (Mais bien sûr!)

I sat down on the chair at the end of the table to have a cup of tea before heading to bed (it was 8pm by this stage!) and leaned back. I heard a small “crack” and my chair slowly continued to tip backwards. The back leg of the chair had gone through the floor boards!

My Husband pulled me to my feet. “Rustic!” we said together and rocked with belly laughs. Perhaps you need to have been there – or at least have been as jet lagged and displaced as we felt.

Anyways it helped to push the niggling question in my brain back into its dark box in the corner of my mind. “What the hell have we done!” I tried no to think about the spacious, airy house we’d left behind in California, nor bring to mind the soft, huge bed that I’ll laid awake on for most of each night for the last two months, as I mentally organized, packed and played-out our departure.

For now it was time to address our immediate needs and hit the futon. For the first time since May, we slept the sleep of the dead straight through till the next morning. Good job too, since even though I’d covered the hole in the floorboards with a large hard-back, coffee-table book, I was afraid that in the dark I might fall down it again or meet some critter that may have come out of it.

On the bright side, things always looked better in the morning and we were waking up in Paris!