For the ultimate birds-eye view many think that the Eiffel Tower is the place to go. However, when you are actually on the Eiffel Tower, you don’t get to view it, and that’s a shame as it is one of the most interesting things about the Paris skyline. Instead, for €15 take a trip to the top of the Montparnasse Tower Observation Deck.

The Montparnasse Tower is the only skyscraper in central Paris. My understanding of it is that as soon as it was built the people of Paris took one look at it (it’s hard to miss!) and said, “Hell no!” (or the French equivalent, which I haven’t gotten to yet in my lessons!) They banned anyone else from building anymore such buildings nearby. A stroke of genius I think, because now you have a perfect viewing platform with an epic 360degress view of the city. I’ve “wasted” hours playing with the photos we took that day. 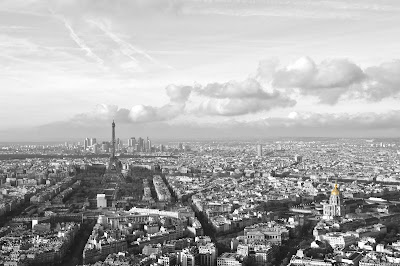 I loved the black and whites and even used photoshopping software to preserve the gold roof on Les Invalides. Here’s a close up of it – in color. 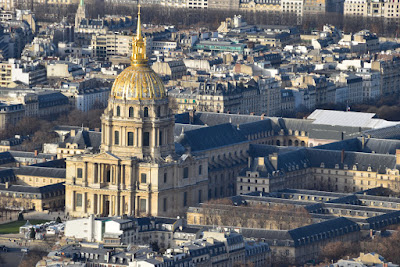 The Montparnasse Tower is a wonderful spot to take a zoom lens. 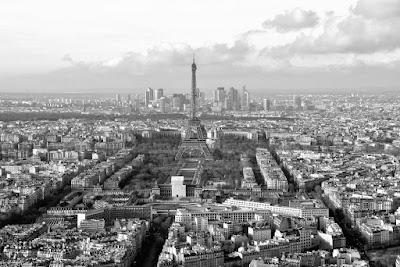 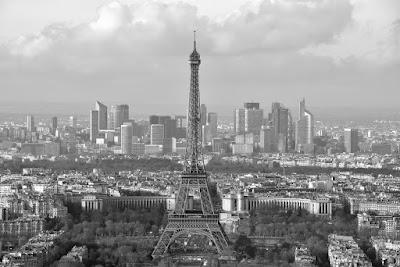 If you are so unfortunate as to only have one day in Paris (quelle horreur!) you could actually tick off all the sights in one swoop! 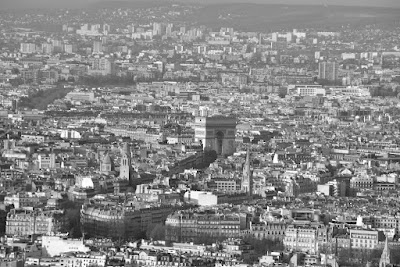 Centre Georges Pompidou – hard to miss with its bright colors. The Tour St. Jacques in also in this shot as is the roof of our apartment building! 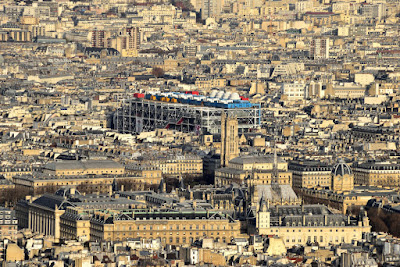 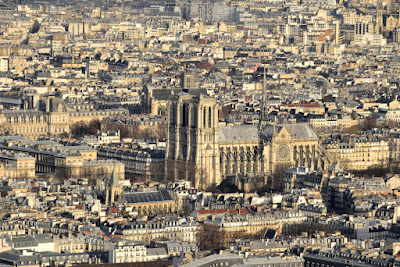 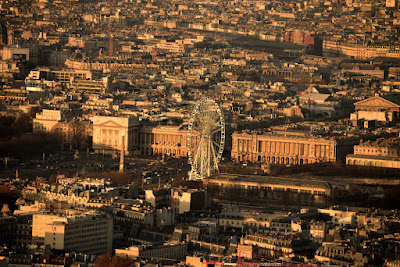 With it being the dead of winter (we went up mid December) the light was interesting. 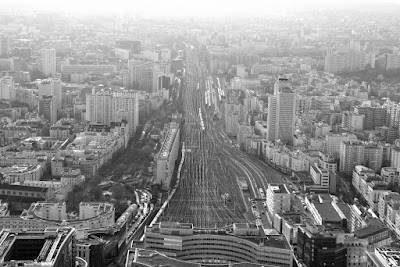 We had timed it to take in sunset. The sun cast light from its daily-death throes in hues of gold through bronze over the landscape. 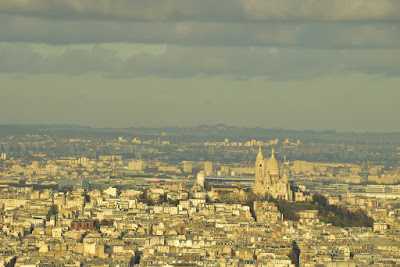 In the changing light… 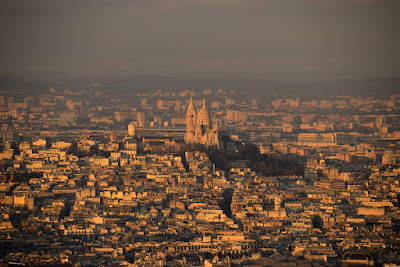 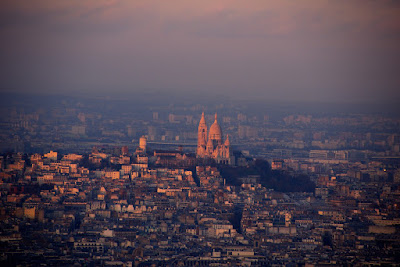 From our vantage point we could even see the French sister to the Statue of Liberty… can you make it out center picture? 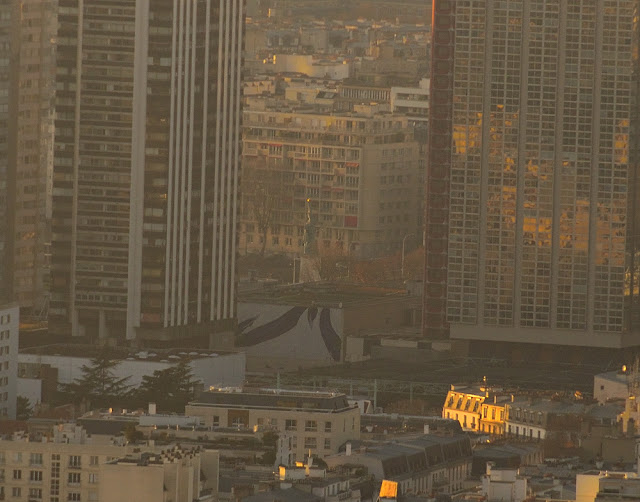 I wondered what lucky sod got a balloon ride in a golden sky. Looks so romantic! 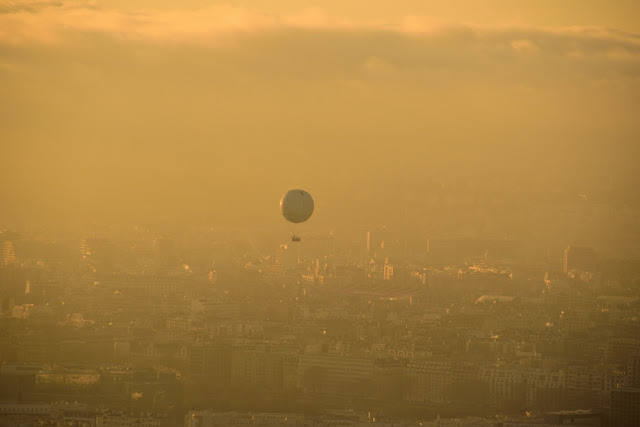 The moon over Paris, above candy floss clouds! 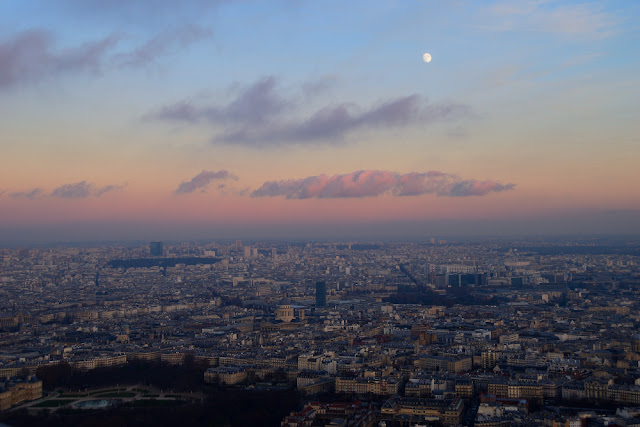 There is a restaurant at the top called Ciel de Paris (the Ceiling of Paris) pricey, but the food is excellent. However we didn’t have a table by the window – my fault – I messed up the date on the booking and we rocked up two weeks early! They had room for us anyways, but it felt like we had been placed at the naughty table, way at the back. So for full effect, you might want to request a table by the window and actually turn up on the correct day!

But the view at night was equally spectacular. 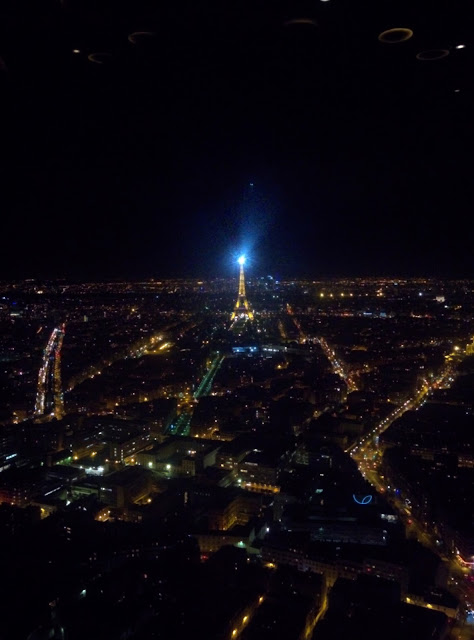 The streets below a maze of buttery lights. 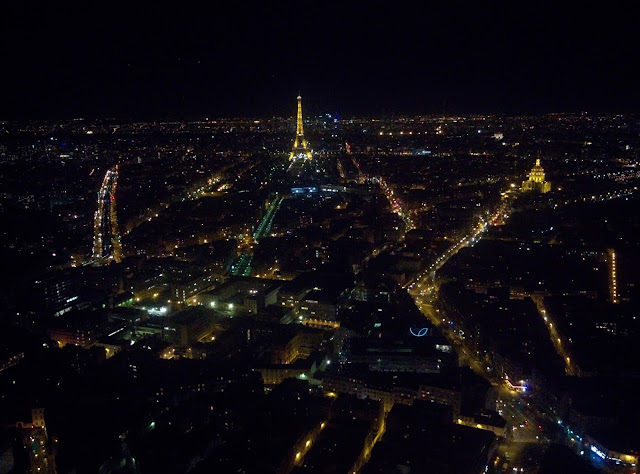 On the ground looking up at Mountparnasse Tower – It’s pretty impressive but I’m glad it is just one of a kind. 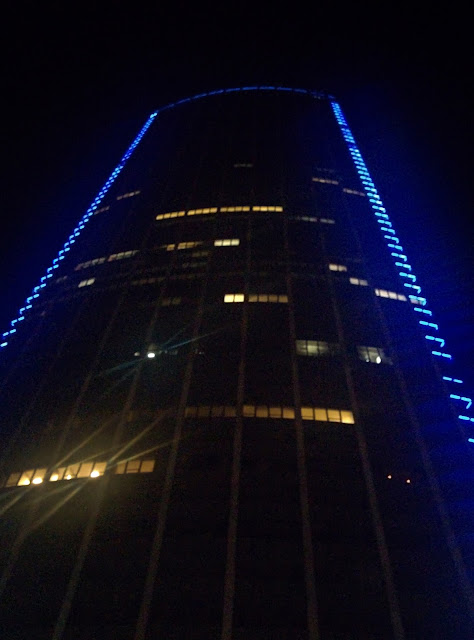