Today is my father’s birthday. He would have been 76, if cancer hadn’t stolen him from us eight years ago.

Poor Daddy – I always thought that the presents we got him were so boring. Every year we’d ask him what he wanted and he’d say, “Just some peace and quite.”

I suppose we two girls were quite the handful back in the day! Not being able to manage the requested “peace and quite” we’d go shopping and usually end up buying him socks! In fact, that’s what I got him for his last birthday ever – socks with the days of the week on them. The week before he died, he accurately predicted the day he would die on – Thursday.

Daddy had never gotten around to wearing the socks, but his humor, like my own could be a little dark at times and when the undertaker was dressing Daddy, I gave him the “Thursday” socks to wear as a little joke. Daddy would have liked it. We gave the rest of the week’s socks to a charity, though I often wondered if anyone would ponder over why Thursday was missing and where did it go!

This morning finally, I accepted it – he’s not coming back. In my extended denial of having lost him, I must have believed that he’d gone on some great adventure and would be back to tell us all about it. He’d come into the kitchen, put on the kettle, direct me to grab the biscuit tin where he always keep the Kit Kats, we’d sit down and the story telling would commence.

This was routine in our house. Everyday after school, we’d have coffee and sit round the kitchen table for a half hour, sharing our days experiences before we went off to our rooms to do homework and he’d go out to work in the barn where he ran a business after a day’s work in school. He worked so hard, along with my mother, and I know that he’d be pleased (as she is) that their hard work meant that my sister and I have had lives with many more choices than we’d otherwise have had.

Daddy was all about the story. If one of the family went away on a trip, there be a debriefing upon our return. We’d sit with your steaming mugs and he’d direct us to begin at the very beginning…what time we left home, what time we arrived at our destination and in chronological order he’d listen to us retell the stories that our trip spawned. Likewise, if he were the adventurer he’d tell us his stories, and boy, what stories he had to tell! Daddy was so funny – he used humor to get through the toughest things in life…even death.

I’m so lucky he was my daddy. He was my hero, my confidant, my port in a storm – an adventurer, a rebel, a man of principal. He was a brilliant teacher. He believed that there was goodness and worth in very person and it was up to the teacher to unlock that. As a teacher myself, I learned more from my father than I ever did in teacher training college.

He believed there was no peace without justice. He sided with the underdog, the poor, the oppressed and fought for human rights for all people.

He and Mummy lived on a First Nations Reserve in Canada in the late sixties-early seventies, making life-long friends there. They presented him with a beautiful Chiefs head-dress when he moved back to Ireland – an amazing gesture of respect and goodwill, not to mention generosity on their behalf.

He loved people, and most of all he loved us.

He rarely lost his temper – in fact, I could count on one hand how often he lost his temper – Okays, I’m not going to count the times he kicked and swore at the lawn mower which always seemed to breakdown halfway through him mowing the lawn, (we’d snigger at his bad language and John Cleese-like antics from the shelter of the house) nor the annual pantomime of lighting the Christmas tree – him trying to find that one broken bulb and the ensuing swearing when he got electric shocks – once a big enough shock to send him flying halfway across the room and passing a fizzle of the shock on to my sister who’d been unlucky enough to break his fall!

But one morning, when I was ten years old, he lost his temper big time.

We were getting ready for school and dawdling over breakfast. Mummy was a nurse, with an earlier start than us and Daddy liked to leave the house tidy for her (or us) returning. He was in a frenzy trying to feed us, tidy up and rush us kids along. There was a general air of grumpiness from all quarters.

At one point he picked up a brown paper bag and said to me, “What’s this?”

He could have looked in the bag himself, but Daddy was no snoop, always respecting our privacy.

Being a huffy little brat, I ignored him.

That made him mad, and he slammed the brown paper bag onto the tiled kitchen floor, smashing the bananas that were in it.

For some reason, I felt really sorry for the poor, innocent bananas! I burst into tears and the whole situation, having been blown out of proportion deflated. There were hugs and apologies and off we all went to school with lighter than normal lunch-bags, due to the lack of bananas that morning!

It was just after morning break and we were all back in class when a knock came to my classroom door. The school secretary came in with a gift wrapped basket of fruit. It was for me from Daddy! My sister had gotten one too. The fruit selection was lovely and even had grapes, which, back then were pricey and exotic, a real treat! But best of all was the card Daddy had hand-made (cutting out the cat picture from a magazine – because he knew his little girl loved animals!) and included in the basket. 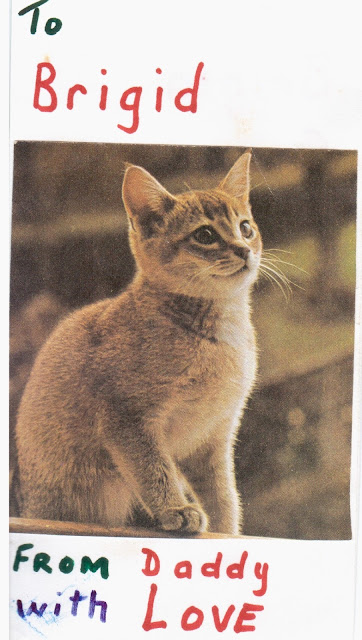 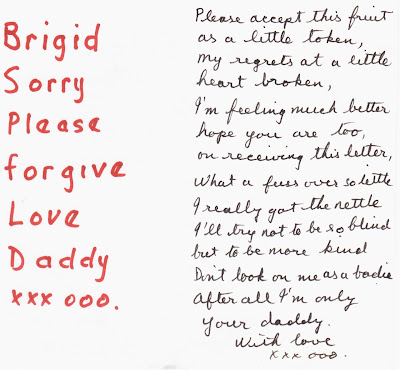 Please accept this fruit as a little token,
My regrets at a little heart broken,
I’m feeling much better
hope you are too,
on receiving this letter,
What a fuss over so little
I really got the nettle
I’ll try not to be so blind
but to be more kind

To this day I cannot read this card without tearing up. I’ve kept it all these years because of all the gifts Daddy has given me in my life, this one is the most precious. It symbolizes the most valuable gift he ever gave to me – his heart!

He taught me how to laugh, love and above all, forgive. I see the repercussions of that lesson in my sister and her family. It is echoed and reciprocated in the love I share with My Husband and in every relationship I have.

Maybe he won’t ever be physically sitting across the kitchen table from me drinking coffee ever again. But he’s there with with every day, in my heart and the hearts of the people I love. And sometimes when I’m really lucky he makes a special appearance in my dreams – he’s already been back to tell me that heaven is amazing and that he’s having a ball!

So have a happy birthday up there Daddy – I hope you got the peace and quiet you were looking for because you deserve more than just socks!