Basil and Sybil came to visit before we wrapped things up here in Paris. 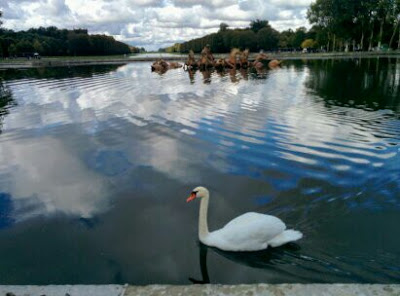 We had a great tour with Corey Frye, who walked us through the Nazi Occupation in Paris. Corey is a brilliant story-teller and knows his facts inside out. It was like stepping back in time. Amid the harrowing tales of the treatment the Jewish people received at the hands of the Nazis, we saw the how the city fought back, and how the Nazis were driven out of Paris in the end, without destroying this beautiful city. He even told us little details about how the Parisians stubbornly held on to their lifestyle under Nazi Occupation. For example, there was no coffee available so they made pretend coffee from things like ground up acorns, or chicory, and sat up in front of the Nazis in their cafe terraces pretending (it must have tasted rank!) to enjoy their cuppas! I was impressed.

The following day we went to Versailles making sure to buy our return tickets in Paris. Versailles and its grounds are massive, such that, even by our fourth visit there were places we hadn’t explored because we’d run out of time what with getting sidetracked with all the wonderful things to see between the front gates and the furthest reaches of the estate. Since it was our last trip, and there were four of us, we decided to splash out and hire a buggy so we could get to the Trianon faster. But the buggy only went about 5 miles an hour. I was not impressed. 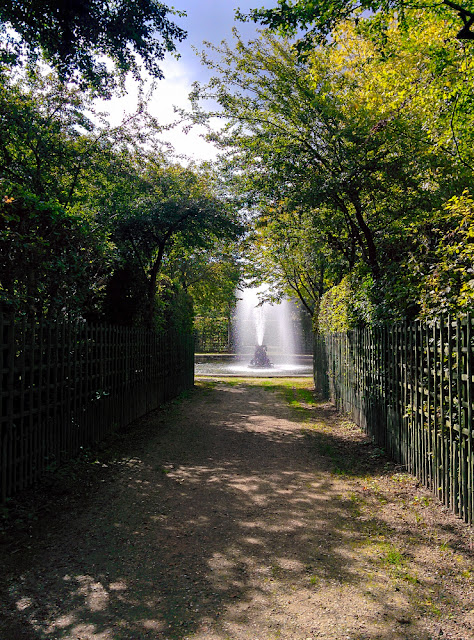 Would it have been faster to walk? We weren’t sure. Then there were all the judgemental stares – which served me right as I’d done my fair share of dishing them out in past visits. My only consolation was if it rained we had our own portable shelter. Sybil and I sat behind with our backs to the lads up front who were driving. (Very Irish set up!) It was not dignified but it did get us to the Trinon faster than walking only because there is a set path for these buggies so our wanders were curtailed. We parked up and went to explore the Trianon. I was impressed. 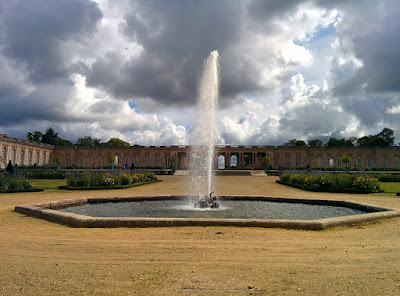 This palace, made from pink marble, was built by Louis XIV so he and his mistress could have some privacy from the court. It does have a more intimate feel about it that the Chateau. The gardens were gorgeous with nooks and crannies and surprises at every turn. The fountains were spectacular. I can never figure out when they’ll be on or off and often it’s just pot luck as to what you get on a visit. We found an amazing fountain in pink marble. A local lady beside me was thrilled. She grew up in the town of Versailles, has lived there all her life and never before saw this particular fountain running. She was very impressed. 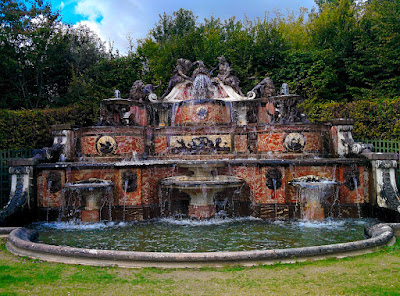 Since it was the day before Basil and Sybils Silver Wedding Anniversary we decided it had been turned on especially for them. They were impressed. 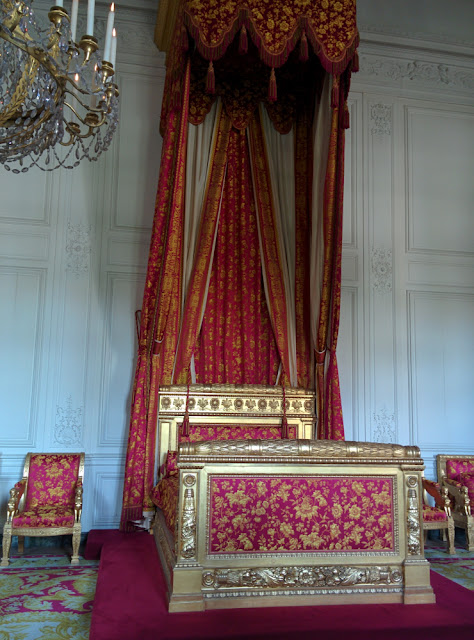 Time was ticking along and the rental on the buggy was racking up. We decided to drop Basil and Sybil off at Marie-Antoinette’s Hamlet, return the buggy at the all the way back up at the Chateau and then reunite halfway in between at Little Venice or La Petite Venise for lunch a half hour later. But well, let’s just say some wires got crossed. Poor Basil typed “Little” into his Google machine and up popped “Little Italy” – Italy, Venice – you can see the geographic connections. But Little Italy was in the village of Versailles, a forty minute walk in the other direction. Compounding the problem was the fact that the internet reception in Little Venice was so bad that we were not getting many messages through from poor Basil. It wasn’t until he was in the other restaurant and didn’t see us sitting where we said we were in the restaurant that he realised he’d taken Sybil and himself the wrong way. Sybil was not impressed – not impressed at all!

But we managed to reunite at the front of the Chateau of Versailles (thankfully, the only one of its name or anything like it in the vicinity!) I felt so sorry for poor, contrite Basil, who took full responsibility. Sybil hadn’t said anything for the past half hour afraid she’d blow her top, but very soon, we were all laughing about it (with Basil, not at him, I hasten to add!) and the Silver Wedding Anniversary was back on. As a couple, I think they dealt with that classic “getting lost on holidays” argument brilliantly – we were very impressed! 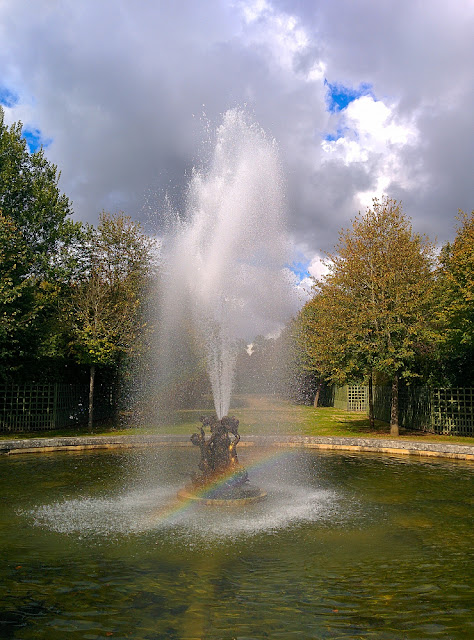 Now we were all starving, so we found a restaurant right inside the Chateau called Ore. I was dying for a coffee and anything to eat. It was the strangest menu I’d ever seen – there were only “Small Plates” on offer and they weren’t kidding about the size. I had a tiny bowl of pasta. Basil and Sybil had toasties – small but beautifully cut, and My Husband ordered the smoked salmon “salad” that arrived with four 1×1 inch chunks of barely smoked salmon and two slices of bread. There was another bowl of three slices of bread given to the table. We asked for more. We were ignored.(Perhaps we should have asked for cake!)  But the worst of it was – there was no coffee! The machine was broken. (Dah!) Even during Nazi Occupation, they had been able to fake coffee! I was not impressed. 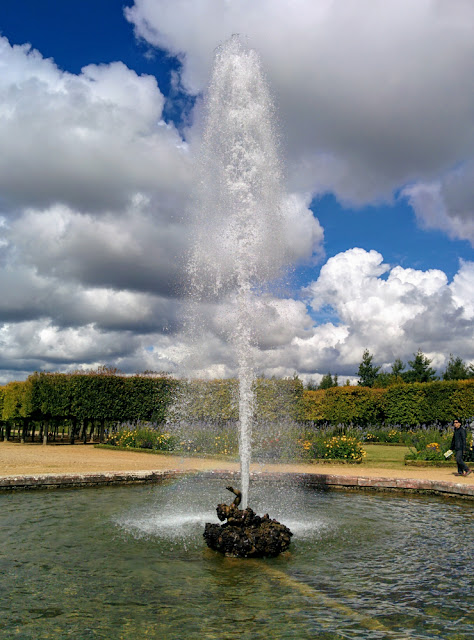 When the time came to order desert My Husband was still starving so he ordered more bread.
“More bread?” the waitress said with the same disgust you’d expect if he’d ordered a cow pat. Evidently, she was not impressed. 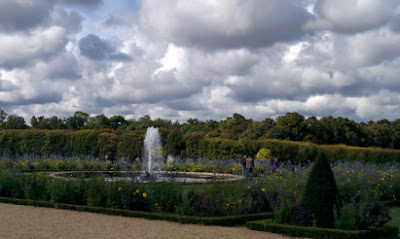 As we sat there, drinking our “not coffee” and nibbling “not bread” we were treated to a pretty spectacular lightning storm. The pewter clouds shredded by silver flashes kept us all gasping in amazement. It was very impressive. 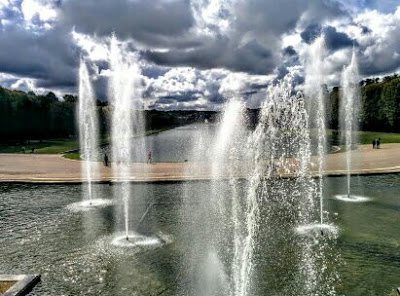 As we left Versaille for the last time, I hadn’t time to get too emotional about it. The rain was still pelting down and we had to make a dash for the train station. Luckily we had pre-bought our ticket in Paris because the queue for the machines was horrible. We dashed along the platform, eyeing up the packed carriages, trying to gauge how much further we could get before we heard the buzzer indicating the doors would close. About midway, the crush lessened inside the train and we hopped on, finding a seat each, close by one another but not together. According to the timetable, the train was due to leave any minute. But this is France. Timetables are merely a distraction. We sat for another five or ten minutes, then a message on the tannoy left most of us bemused while about twenty percent of the train got up and left. My buddies looked at me but heck I can’t understand those public address messages on a train when they’re in English never mind trying to employ my patchy French. Fortunately, a kind person nearby translated for us. The lightning had caused a power failure – there was no electricity on the line. That storm was much less impressive now! 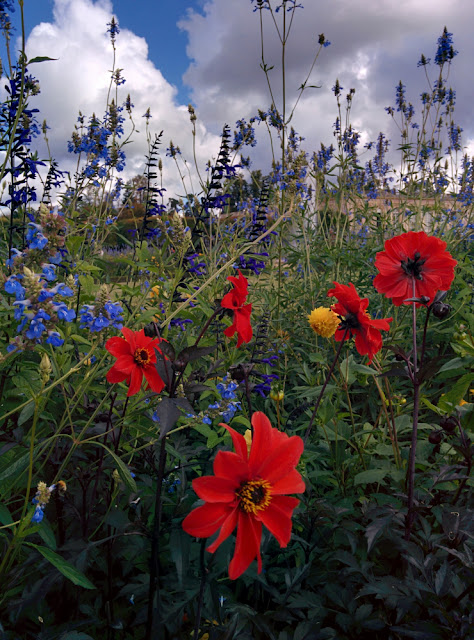 We were able to catch a different train a rain-sodden fifteen minutes walk away, but not before we had stopped at a local cafe for a cuppa and some more abuse from the waiter for daring to ask him for milk for the Earl Grey tea! He even charged us an extra 40 cents on a separate bill for the milk, he was so unimpressed with our ordering technique.

Fortunately, the trains at the other station worked and even though the staff told us all our tickets would be good on this line, they didn’t work on the exits at the connections. It was quite something to see a hundred pissed off, soaking wet passengers just jump (or climb over or under) the turnstiles. Part of me would have loved to see someone try to stop us, and part of me was glad the staff were smart and ignoring it – there’d have been a riot for sure. Instead, the crowd surged forth unimpeded, not impressed that the tickets had stopped being any use.

Finally, we were back in Chalet again and hungry. Interestingly enough our ticket worked here again! Paris logic at its best. We’d received our daily quota of abuse from restaurant staff and decided to duck into the good ole M&S inside the station (when I say inside, I mean behind the turnstiles – you have to pay a train fare to shop at this one) and get some ‘ding’ food. It was lovely to finish our day with a nice curry and a G&T back at the apartment. Not the most culturally Parisian thing to do but we’d definitely put a ton of authentic Paris experiences into the bank that day. As for the M&S curry – Basil and Sybil were impressed – and sure isn’t that what counts?